Had it been any other machine, I would have opted either to leave it behind, or put it directly up for adoption... 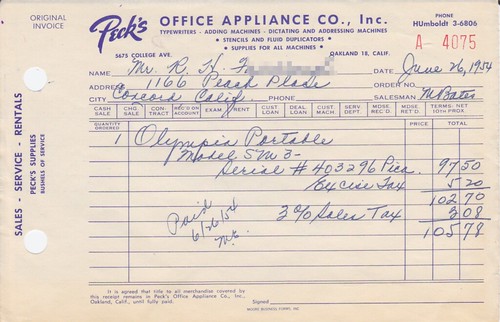 But you know, I have this weakness... for all things Olympia. 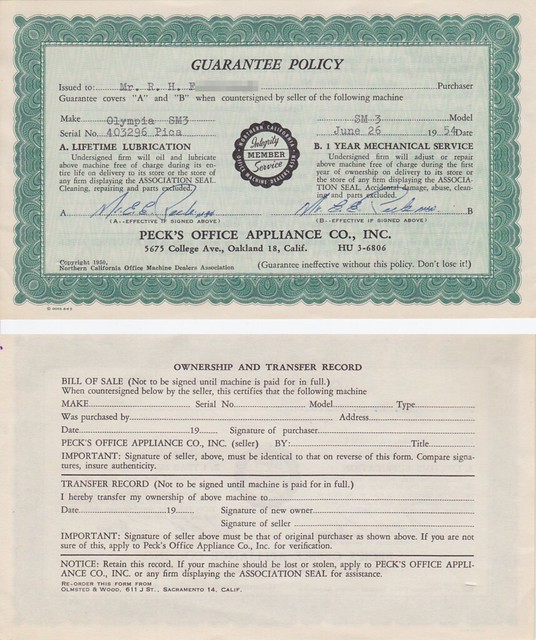 Especially SM3s, and extra-especially ones with a Pica typeface. I find the bigger face easier to read and edit, and it seems to scan better for me at NaNoWriMo time.

The tweedy case threw me off at first, and it was locked, so if nothing else, I had to solve the mystery. I gathered up my tiny collection of case keys (two) and hoped that one would fit so I could solve The Secret of the Anonymous Case at Goodwill. Evidently, junior sleuths the world over have nothing to fear, as closer inspection the next day revealed that someone had masking-taped the manual to the outside of the case. Tucked inside the manual, though, were the added bits of ephemeral joy scanned above: the original invoice, and the lifetime lubrication and oiling certificate, sealed by the Northern California Office Machine Dealers Association. As soon as I build that time machine, I plan to dial it back and check out one of their regional meetings.

Peck's Office Appliance Company left a fine sticker inside the case which I'll have to photograph and include here. It's swag, to quote my teenager. The former site of Peck's appears to be smack in the middle of the BART line's Rockridge station, the San Francisco Bay Area Rapid Transit system: an electric elevated/subway train that is one of the major transit options around here. They're currently having a labor dispute, and we suffered from a strike back at the beginning of the summer that led to serious traffic headaches. They're still battling it out, leaving everyone scrambling for alternate ways to get around.

That's something we don't really think about as commuters: the homes and businesses that were replaced by our transit system. It really only comes to mind in a few places along the line, as the tracks skirt close to a crumbling property or appears in the narrow buffer between streets. Rockridge was one of the stops on the line that I rode for years in and out of San Francisco. BART opened in the 1970s, and was a fixture out in the suburbs by the time I moved to California twenty-five or so years later. Rockridge station opened up in 1973, says Wikipedia, just nineteen years after this typewriter was sold. I don't know how long Peck's held on after that, but I don't think I'll be able to cash in on that "Lifetime Lubrication" offer any time soon.

Like all good Olys, this one needs the standard bushing replacement surgery. It's no big deal: I'm familiar with the process now, and know exactly where to go in the hardware store for the replacement parts. 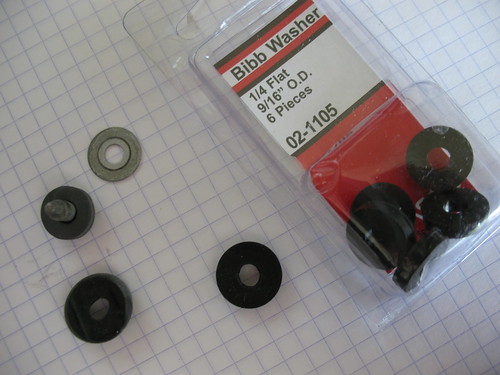 Replacing a set of crushed and fossilized bushings hardly warrants a mention... 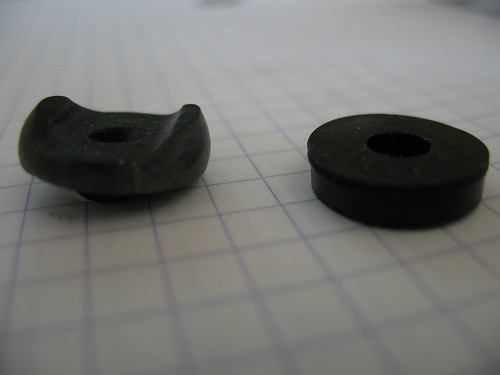 What this does mean, though, is that one of the other machines is now up for adoption. After some soul-searching, I've put up a Smith-Corona Sterling that's basically sat idle since it came in on a swap from Olivander of Machines of Loving Grace fame. It, along with the other machines, are up on a new dedicated "adoption" page. This might be the best way for me to deal with the thrill of the hunt, without the space considerations of the "trophies": find 'em, fix em, find new homes for 'em. Sometimes replacement is the only way.

UPDATE: the lighting couldn't be much worse for these. Anyone know a secret for getting White-Out out of crinkle paint? (At least I hope it's White-Out) 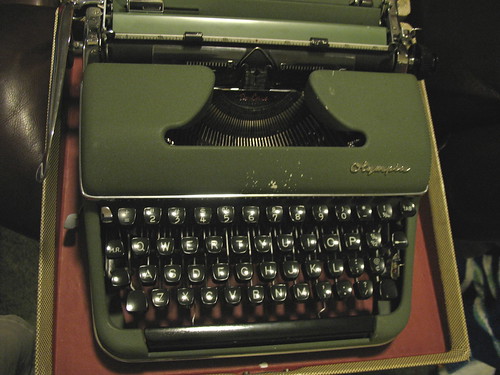 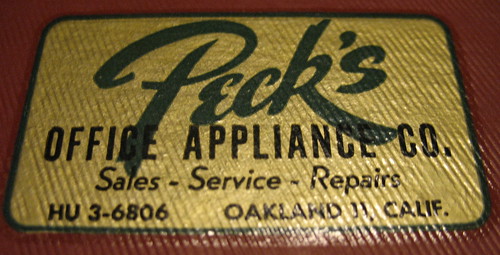 Golden label with green lettering, just about the same as the paint color. Stylin'! I wouldn't mind this being on the machine itself, but it's discreetly tucked inside the case lid.

Email ThisBlogThis!Share to TwitterShare to FacebookShare to Pinterest
File under: ephemera, everything must go, flickr view whoring, goodwill, lucky find, olympia, sm3, stop me before i thrift again

Have you considered having the best of both worlds? Meaning, typewriter hunting and buying by proxy?

For a couple years, one of my correspondents and I did just that. I got access to machines not found in my neck of the woods and my correspondent got to enjoy all the thrills of hunting/finding the "right" typewriter (and probably got to play around with it a bit). Then, you don't have to store it and it is shipped to a new home and everyone is happy?

Being in the midwest, I'm always reading up on you west coasters and northwesterners finding great typers.

@Ted: I need to get the camera and the machine together. The same green I already have, but with the added bonus of a line of white-out splatters on the ribbon cover. Yay? Some cleaning is in order, as usual.

@Deek: As in "So-and-so wants me to find machine X for them?" That's a possibility. Once I get the inventory down to a size where my lovely wife doesn't sigh every time she sees the stacks of cases :-) I may hang out a "hunter for hire" shingle. They're getting more spare around these parts, though. My boom years had me acquiring machines at a pretty good clip. Now I go weeks or months without a sighting. I don't know if I could restrain myself if if found one after a severe dry spell. :-)

Try ths good old toothpaste trick? Mine mostly had chalk, but it helped. And baking soda might work too.

Better late than never? I have had success in removing hardened sno-pake from all surfaces with lighter fluid. I think it is the same as what's known in some parts as naphtha. A cotton bud soaked and dabbed then gently rubbed or brushed with a dry toothbrush in small circles. At first, it won't work... and then it will. It takes a few goes for the dried stuff to dissolve. You may experience some softening of the crinkle so beware of scrubbing it flat. Seeing where it is on your SM, I'd clean the cover with soap and warm water in the usual way, then deal with the hard stuff 1cm2 at a time.