Whereupon I strap on the sandwich board and declare:


The End is Nigh! 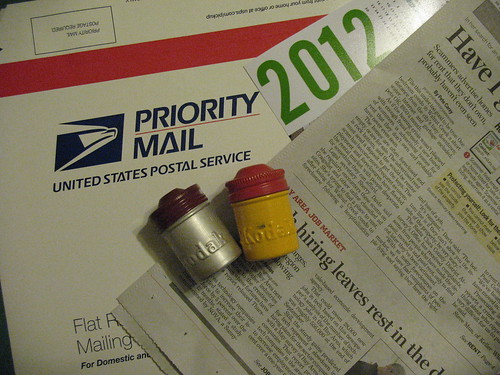 No, not that kind of doomsday, although if you work for one of the institutions represented above, it probably feels like it. Once-mighty Kodak is now suffering the indignity of seeing its stock trade for less than a dollar per share, with the ravening wolves of bankruptcy snarling just outside its doors. The U.S. Postal Service offered to delay closure of large parts of its infrastructure until the end May, but it's clear that volume has dropped well below its capacity, never to return. And the newspaper industry continues to consolidate, restructure, reduce, and combine in an attempt to remain relevant in a world where nearly everyone carries a fully-connected two-way computer in their pockets.

As a photographer in a line of photographers, I'm sad to see Kodak being steamrolled by history. The silver film can up there belonged to my late grandfather, an ad man by trade, decades before Don Draper and friends made it cool. (Grandpa worked on the Westinghouse campaign, and others I don't recall.) Losing Kodak is losing a part of that connection to the hours spent under the dim red safety lights in his basement darkroom, watching images magically appear on paper, surrounded by amber bottles of mysterious liquids and yellow packets of dry chemicals. At least Fuji still seems to be in the film business, and there is a manufacturing outfit in eastern Europe that is still making film, but the loss of Kodak is truly the passing of a great American success story.

As a retronaut and sporadic letter-writer, I'm sad to see the post office falling away, becoming a niche service that even people like me only mainly use once a year for sending Christmas cards and packages. Unless SOPA passes and drives us all back to pre-Internet times and technology -- and boy, is the Typosphere ready for that eventuality -- I see the end times for the good old USPS coming sooner than they'd like, and later than is practical. I'd better write some more letters and use up those stamps.

As a reader, the loss of the newspaper should hit me the hardest, but as I picked up our paper this morning in the driveway, half-soaked because it slipped out of its protective bag and into the rain, I realized that we're only getting it for two things these days: comics and coupons. I'd like to say I'm reading it for news, but everything there is a day old at least. "Local" news has all but disappeared in the wake of our own paper's many mergers: shown in the photo is the Business "section", which is a huge misnomer, as it is simply one page of newsprint, folded into half. Four pages, and the last page is taken up by a 3/4 sized advertisement. Our delivery person is an anonymous stranger that drives up and down the neighborhood at 5:45 am each day, after having driven thirty miles or so from his home for the privilege of peppering our suburban neighborhood with a bundle of advertisements insulating yesterday's news.

So where is the bold, beautiful tomorrow?

To be completely honest, I think it's in our hands. Literally. Mike Speegle is off making his writing dream happen by just doing it, publishing his own book, and damn those writing-program naysayers. Typosphere godmother Cheryl Lowry is working for a certain large seller-of-everything-under-the-sun, and leveraging her writing skills and 'net savvy into some sort of position that requires her to carry about numerous cool toys. Rob Bowker is sending hand-typed letters to any and all takers, bringing back the lost art and simple joy of a handmade message (and maybe introducing a new generation to the idea.)

And, oh yes, there's that little "Occupy" movement that the kids are so het up about. Whether you see this as citizen democracy or hippie rabble, it's the same thing -- individuals trying to jump in and do something, make a change, with their hands and voices and actions.

Dissolving old institutions, and trying on new ones. Smaller, localized, and independent. Kodak's demise doesn't come at the cost of photography, citizen journalism brings an immediacy and intimacy that the printed page cannot, and the mail? Unless it's a letter from a pen pal, 90% of what I get in my mailbox goes right into the recycling bin.

Maybe it's time to bring back the Pony Express? I bet my newspaper carrier would be up for it. I have a sandwich board here that says he's going to be out of a job soon.

As a former film user and still fan of Kodak's cameras of old, their near death saddens me as well. They did not adapt to the new digital world. Yes, me being a former film user does not help, but I mostly shot with Fuji Reala anyway.

Our local paper, the Kansas City Star, is apparently a cash cow for the chain. It is being milked for all it is worth and continues to shrink. The layout gets worse year to year and typos are increasingly common for the precious few non-sports related words that are left. They are trying some new things, but if they ditch our favorite comics or the NYT crossword, we'll cancel our subscription.

Last week I passed by the smallest post office in America. Roughly the size of a bathroom, it is tucked on a gravel pullout in the midst of the Big Cypress swamp. It would suck to have no access to service, but on the other hand it seems hard to justify the overhead necessary to support outposts like this and the airlift to rural Alaska.

It amazes me how fast a corporation will give up on a product, Kodak has been in bad shape for decades and giving up on film photography has been one of their faults. The other is not getting into digital photography properly and early. Kodak invented the CCD array and also bought some of the early electronics manufacturing technology developed by one of the company's I worked for, however Kodak failed to have good vision instead they focused only on the bottom line. I was shooting up to 2000 f.p.s. in the mid 80s with their high speed digital cameras, but it did not take long until Redlake overtook them.

I'm a film photographer and will continue to use film even when I am forced to buy foreign film only.

Blame Congress for screwing up the postal service decades ago when they disolved the Post Office Department and created a business unit the USPS.

A great post about sad things. Liked it very much. I find your white on black text a bit hard to read, though.

Enjoyed the post, thanks Mike. I have a couple of those yellow Kodak cans too. They have Pan-F in them. Somewhat past the expiry date. There's no history of photography in my immediate family, but my late uncle Cliff was a jazz man and photographer/film maker in his spare time - that's where they came from - couldn't part with them, silly really.

You make me sad.
(Come along, Patsy.)

This is all very well put.

I think the great nondigital institutions like these are largely doomed (although physical objects still need to be delivered in packages, and USPS can compete with the private companies in that area).

What's the role of the typosphere? Exploring niches and gaps within the digital paradigm, creating pockets of alternative possibilities, working with and through the digital world to promote these possibilities. There isn't going to be any antidigital revolution, but there can be synergies between old and new, and there can be reservations where we maintain older ways of doing things.

The story is told, in my family, that when my oldest cousin was born, my grandfather cleaned out the cash drawer at the family business, and bought camera gear to photograph "the girl." Anybody have a story like that, involving the latest iThingy? No? That's because megapixels have none of the romance that silver halide does.

Locals call the local paper "the fish-wrapper" in reference to the level of writing found in it, and I frequently describe the Monday edition as a pamphlet. We might grieve the loss of print media if it was something worth reading.

As for the Post Office, I don't know if it's because I'm a typewriter-loving neo-luddite, but I absolutely refuse to pay my bills electronically. The notion of ending the USPS smacks of a conspiracy to get people like me to publish our personal information on the internet.

These are dark days, indeed.