In yesterday's typecast, I mentioned getting a bonus prize from Exaclair, the U.S. importer of Rhodia products. This all came about because I entered a drawing to win a Rhodia "dotpad" notebook, which uses a fine grid of dots instead of a lined graph. About ten days ago -- long after the contest was over -- the VP of marketing sent out this email:

I am sorry for the delay.

We did not like the original batch of orange dot pads so I didn’t send them out to the winners. I have been waiting for the 2nd batch to arrive from France and they finally did. I am now waiting to receive them from our warehouse. I will have them out to the winners, plus a surprise for your wait and time and trouble early next week.


Before I go on, I just want to point out what a class act this is, and I'm not just saying that because I've managed to secure great free stuff from Exaclair. This is exactly how customer service is supposed to work, even if your "customer" is some random shlub on the Internet, as I am. A big hand for Exaclair and Karen A. Doherty, their VP of Marketing. You can send me free awesome stuff anytime...


A couple people asked for my impressions of my bonus prize pen -- as you do -- so here's an impromptu what's-at-hand review for you.

This is not a very expensive product, but it's still a first for me, as I don't own any pens of this style: a ballpoint that accepts a fountain pen ink cartridge. Strictly speaking, this would not be a pen that you'd be heartbroken to lose, if only because it's almost entirely plastic, except for the clip, a decorative metal ring where the cap snaps on, and the point itself. I'd put it in the league of the Pilot Varsity, which is a disposable plastic fountain pen (although it can be refilled.)

Here they are side-by-side: 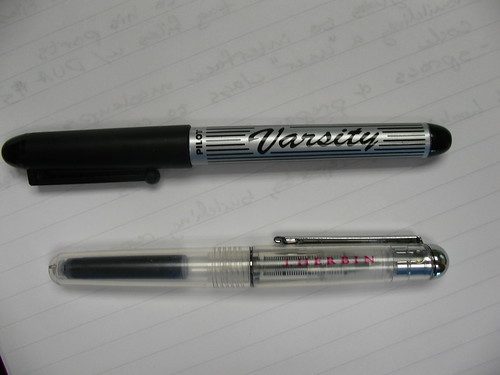 The weight is almost identical, making this pen very light and easy to carry around. It's also about 3/4 of a inch shorter than the Varsity. There's a definite feeling of "smallness" to the ink roller, which, again, makes it very portable and pocketable, but may be awkward to hold in larger hands if you don't post the cap on the back of the pen, like so: 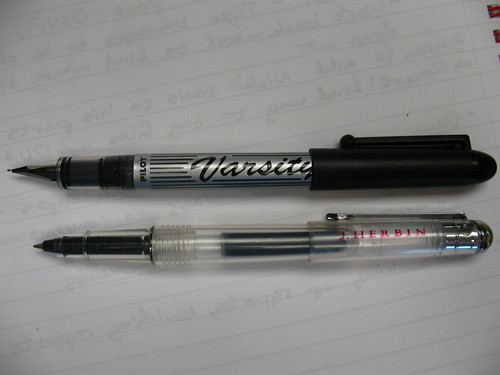 Even posted, it's noticeably shorter than the Varsity, but not awkwardly. Conclusion: this is a pen meant to be used posted, or by the tiny-handed. Again, since it's all-plastic, it's not like you're doing damage to a valuable writing instrument, but like a Space Pen (which I also own) posting the cap feels necessary. 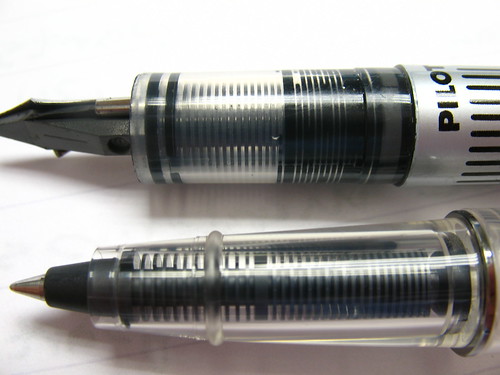 The feed in the roller is visible, just like that of the Varsity. They're very similar, and cleaning between inks may be an issue. To refill the Varisty, you pull the whole feed out, making it available for rinsing. 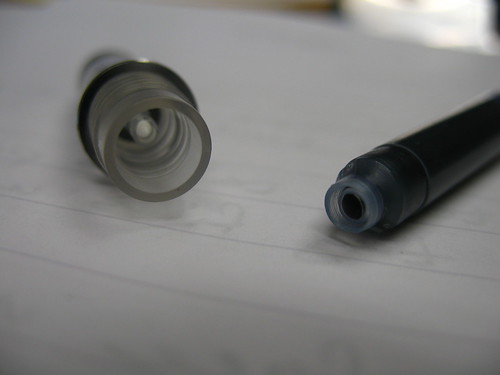 The roller takes standard "short" international-end cartridges, which always makes me happy, since those are pretty easy to come by, often masquerading as calligraphy pen refills. Long cartridges -- like Waterman -- will not fit in this pen, alas. There's a gap once the cartridge is pushed into place, but it's still not enough of a gap to get a long cartridge in there. 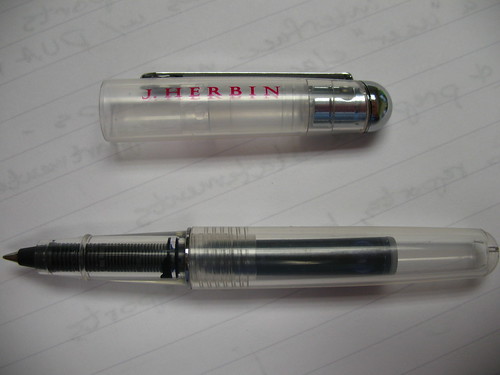 Because I am impatient, I gave the cartridge a little squeeze to get the ink into the feed. I don't know if this is necessary, but it's part of the ritual I have with my fountain pens, and bad habits die hard. Of course this splooged ink into those nice, clean feed fins. 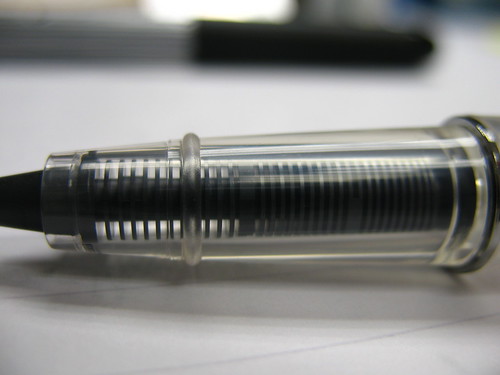 Oh well. At least we know it's mine now, right?

There appears to be a very, very tiny breather hole in the end of the pen, down near the writing point. The ink leaving the cartridge needs to be replaced with air for everything to keep flowing. I don't know if you can see it in this photo, but it's there, right about at the 12 o'clock position. 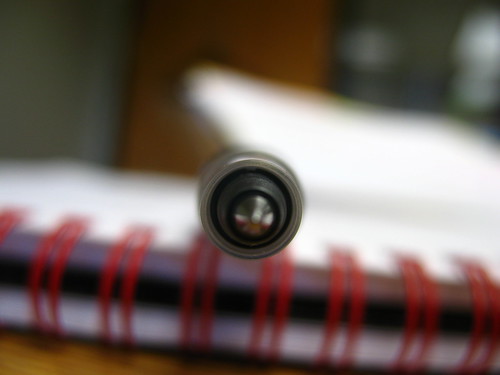 The dedicated pen hacker (or ink lover) could easily convert this into an eyedropper pen. The cap seals tight with a click, and there are no holes in it that I can detect: the clip is affixed to the outside.

The back of the barrel has a tiny hole in it, which may just be leftover from the molding process. A drop or two of hot glue or clear nail polish would probably seal it up tight.

So, how does it write? 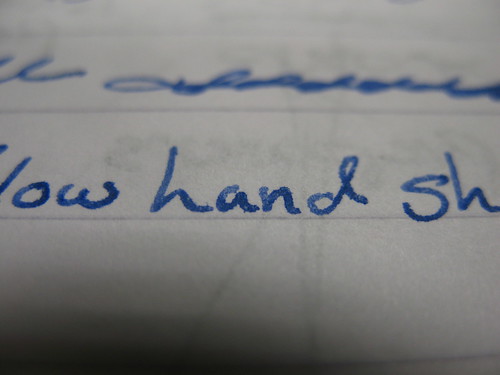 Not bad at all. You're writing with a very fine ball, obviously, so it's not going to be as smooth as a fountain pen, but using the same water-based ink makes it seem slipperier to me. And since it's using a thinner ink, you can also get shading as seen above (and seen better in-person.) Plus, you get the advantage of being able to use all the colors and styles of real inks. There was a blue cartridge inside the pen when it arrived which I used for this test, and Karen thoughtfully added a tiny tin of six dark-green cartridges to use when this one is gone. That's probably the best part of the whole thing: replay value!

Very interesting. And a nicely done review with great photos.

When you get around to picking up more cartridges, I could put a word in for the Kaweco cartridges--they're pretty reasonably priced as such things go, and I like the colors. Not the selection of J. Herbin, of course, and no nifty little tin...but nice, nonetheless.

Or there's the playing with syringes option...