The "witchbox" project came to a close this morning, as my youngest tore into her stack of presents. Front and center on the table was the gift in question, which my wife and I denied all knowledge about. You learn very quickly as a parent that lying and messing with your child's head are two simple, but deeply satisfying joys. So let's follow the deception train to from start to finish:

If you read the post from the start of the week, you'll know that my wife and beloved co-liar were informed recently -- in the matter-of-fact way that six-year-olds have -- that my daughter, was, in fact, a witch. As she kept scavenging scraggly, splinter-laden sticks from the yard to wave at us and her siblings, we figured this was a fad that was going to stick for at least a little while. Since she's been using the laundry soap cups to mix up sand-and-leaf "potions" in the yard, and since we're tired of sand-and-leaves in the laundry, we set out to make an inexpensive witches kit for her birthday. We pulled this together in about a week and a half, with inspiration nearly completely stolen from Dante's Wardrobe and her excellent faux package projects.

Step one was sourcing replacement bottles for the potions. Assorted bud vases from local thrift stores supplied these: 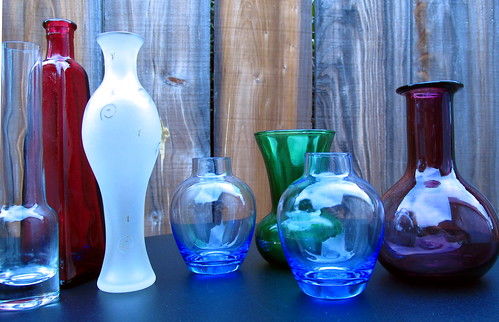 Tip: the more exotic-looking the bottle, the better the effect. That tall white bottle with the faded gilt (?) designs was the hit of the day.

Since they are secondhand, and some are a little past their best days, I had the idea that these would be a gift from a real witch, made up of some of her leftovers. Co-conspirator was tasked with finding a box big enough to hold all these, which she did with excellence: 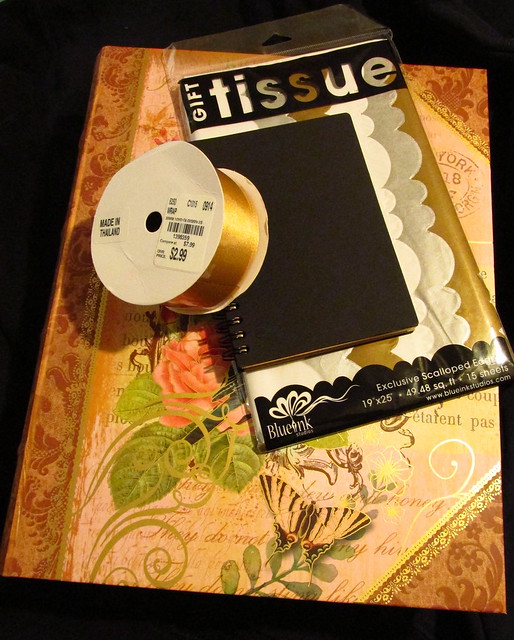 It's difficult to tell but this is a decorative book-shaped box made from heavy cardboard. She also picked up some fancy tissue paper and ribbon, and raided the papercrafting aisle and our own craft supplies for more items to include. Here's what it looked like last night, minus the bottles, which are off-camera. 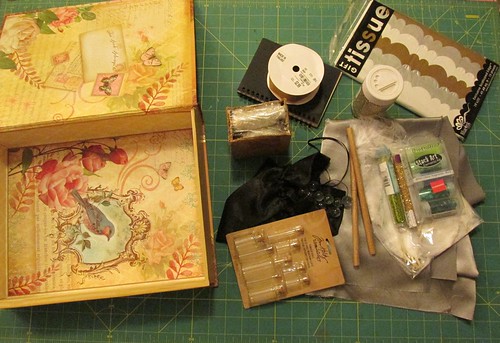 For wands, we have a couple of pieces of leftover dowel rod from the garage, sanded down a bit and sprayed with scrapbooking sealant containing glitter. Clear plant marbles went into an old bag we had around. Given her steadier hands, the missus volunteered herself to fill up the tiny glass vials of "potion ingredients" (glitter, flakes of paper, tiny beads) while I worked on wrapping and packing up the bottles, and the small mortar and pestle that's packed up here in cardboard and tape.

I brought all my Tetris skills to bear: 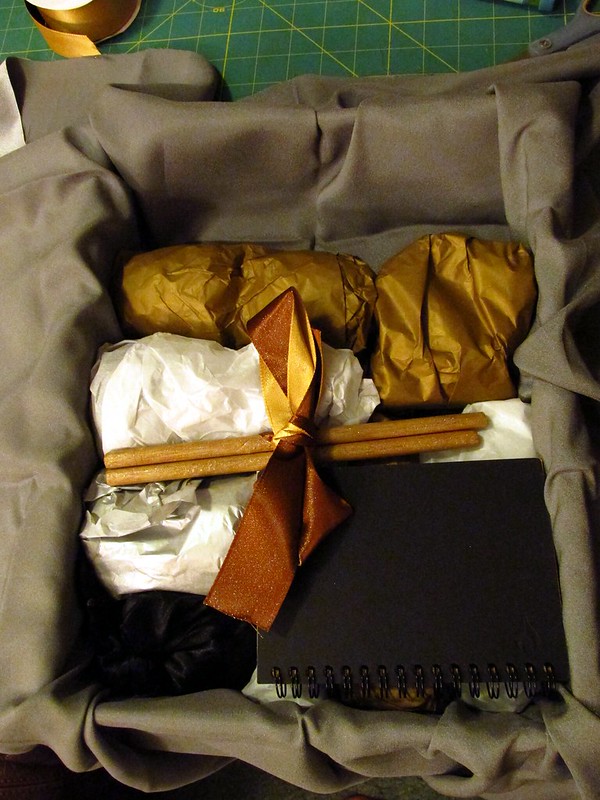 ...while a lot of careful funneling and filling happened next to me... 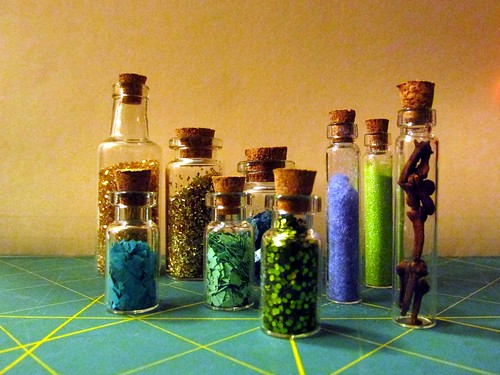 Pack into the open space with some remaining tissue, and add a few feathers... "phoenix down," suggested my middle child, a Harry Potter fan. Better than my suggestion of "squished owl." 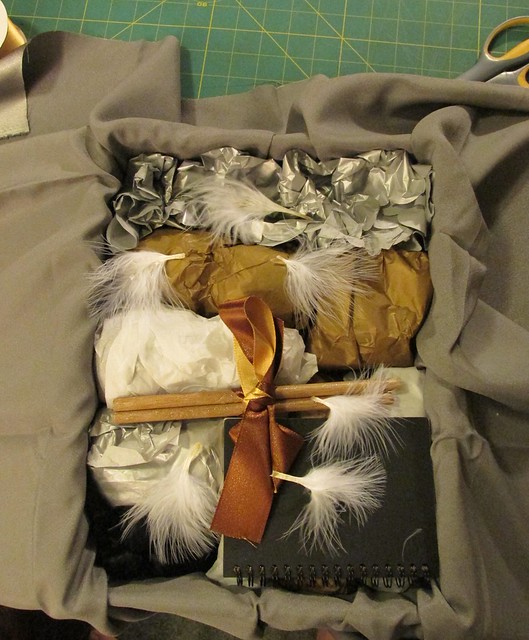 And seal it up with some more ribbon, which we were surprised to discover was two-tone: 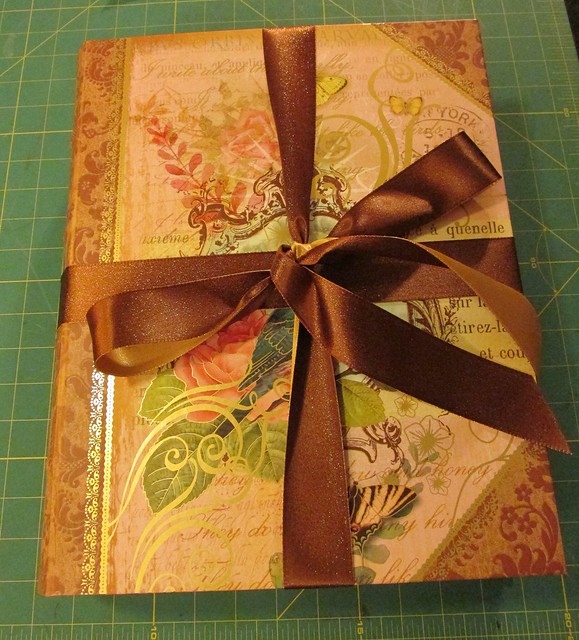 To provide a cover story for this assembly, and because I always relish an excuse to play with pens, there was a letter enclosed (click for more readable size): 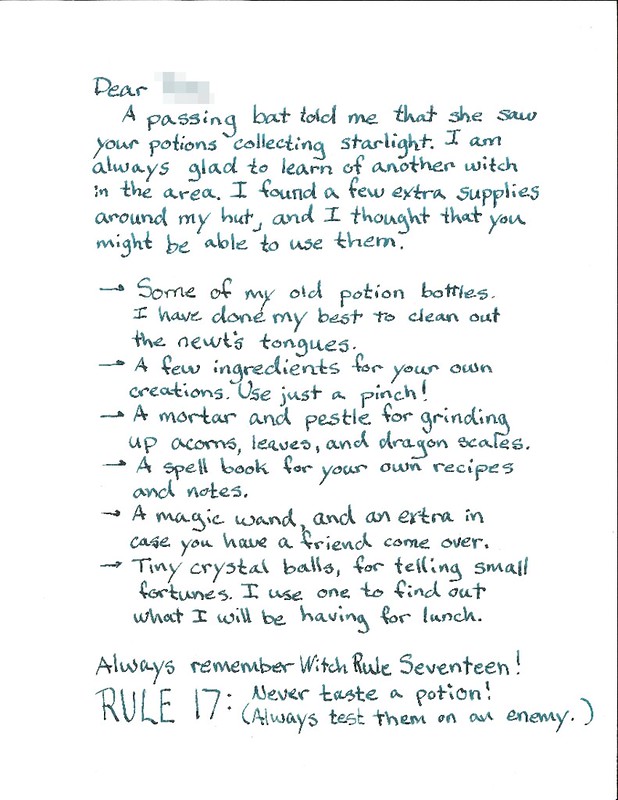 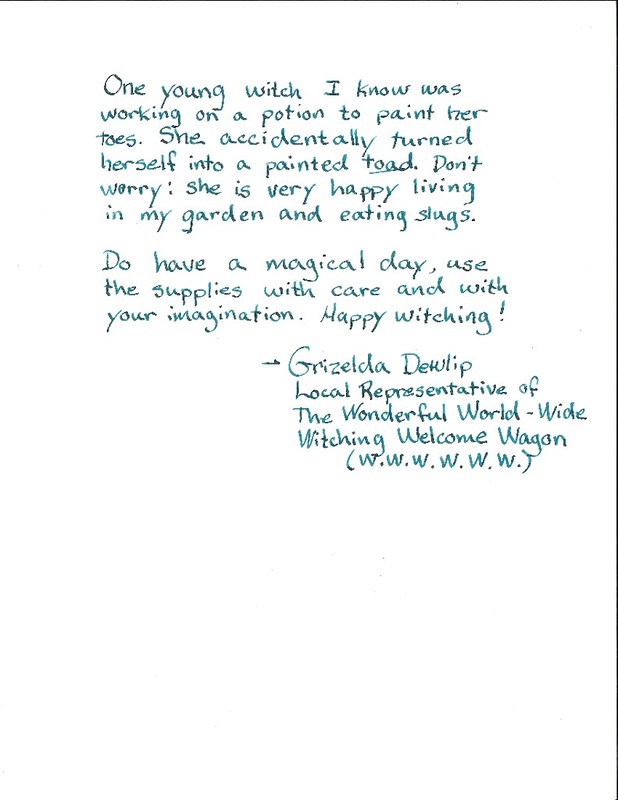 My only regret with this letter -- beyond my penmanship -- is that I did not include "Wizard" in the organization name, because seven W's in a row is just that much funnier than six.

The unboxing was a great success: 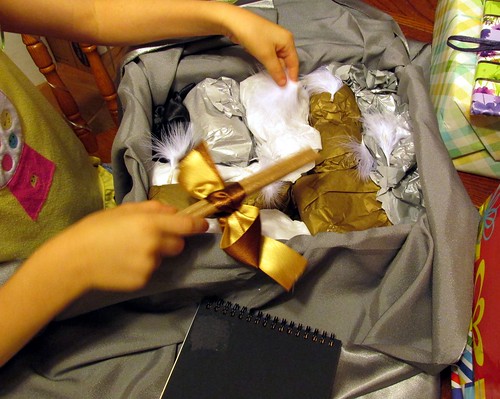 Grizelda's letter was read aloud by the recipient, and I'm pleased that she both laughed and said "ew" at all the right places. Clearly, my target audience is seven-year-olds.


Our goals for this project were do amuse and delight, on a budget, and to get nature out of the laundry room. Did we succeed?

Amusement and delight are a huge yes. As I was packing up for work this morning, youngest was already preparing to mix up some concoction in the back yard. I expect we'll be finding gold glitter and mysterious purple powders in our lawn for years.

On a budget is an optimistic maybe. There were a number of new items in the mix, like the glitters, the box, ribbon, the tiny bottles. Everything purchased was on clearance or came from a discount or thrift store. Some of the items were things we had around the house. That tall white bottle that was so awesome cost all of 25¢  Kids of this age don't care.

The old adage about "time is money" applies here, too. If we had started sooner, I bet we could have sourced more of these things at lower cost. Those tiny vials arrived about 10 hours before the package was actually opened, for instance... but they are the same bottles for sale at the craft store across the street, which I could have snagged with a coupon. Admittedly, it's hard to plan around the whims of a 6 year-old, and who knows where we would have hidden everything in the meantime.

In general, though, I'll say we got far more for our time and money than the standard pink plastic playset. It's easy to pick something off the shelf and hand it to your kids, and I will be the first to admit that we've done that on more than one occasion. We are not a Pinterest-type household. But I also see the worth, and yes, the magic, in doing a project like this, especially an open-ended one that encourages imagination. Already we're wondering how to write a thank-you note to a witch.

I'm certainly glad we did it, and I don't even feel a little bit like a liar.

Email ThisBlogThis!Share to TwitterShare to FacebookShare to Pinterest
File under: color me crafty, fatherhood, flickr view whoring, im in yr blog stealin yr ideaz, stop me before i thrift again

So cool! You guys are really neat parents, obviously.

Oh very crafty! Looks like a lot of fun.

I, for one, am outraged. When I tell my kid a fat elf came over with his aeronautical caribou to drop off presents, my kid knows I'm telling the honest-to-God TRUTH.
Shame on you.