The usual apologies apply for my rambling, twisty handwriting. This was as much about testing the new pad of paper as the pens, but not, tragically, legibility.

My camera has all but given up the ghost now, so you'll have to satisfy yourself with canned product photos from the web sites of the stores where I bought the pens. I do think it's good marketing to have these pens work right out of the package: no shaking, no refills, just pop the cap off and write. For a steel-nibbed pen, this is surprisingly smooth to use, and at least in my tiny sample size of two pens, both are quite nice. (Confidential to Bic: please send a dozen and I'll give them a proper try.) The ink dries quickly, and there is very slight shading.

I opted not to test some of the other plastic pens I have around, since they are mainly calligraphy pens like the Sheaffers or the Pilot Plumix. In contrast, these three are very much meant to be your everyday-use type writing instruments, with presumably a touch more élan than your standard ballpoint. 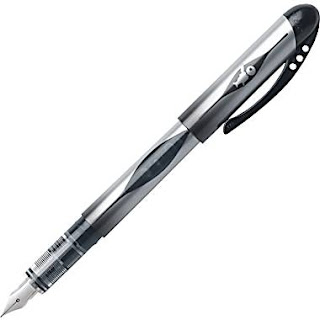 
It's silly, but I really like the clip on this pen: it makes me think of Jules Verne's Nautilus. As the photo shows, it's all one piece of molded plastic, attached to the end of the cap. The eye-shaped opening in the side is presumably the ink window, and the clear area above the feed also shows the ink sloshing around. In writing up this page, I realized that there's really more negatives than positives... and I think that pretty much sums up the pen. Doing a little more investigation shows that the refill is not, in fact, a standard type, so when I use up the ink, this pen may just get used for parts. Here's a review with far better photos that sums up the experience. Scratchy, and nothing to write home about (ha!) I'll backtrack on my recommendation comment a bit, given the non-standard nature of the Zebra refills. The Varsity has taken on all challengers, and emerged victorious. That red ink is especially fitful in my regular pens, so it's impressive to me that the pen writes after several weeks -- months? -- of disuse. The caps fit snugly and are airtight. The model shown in the photo below is the original style. I've seen a new barrel design since, and I hope it doesn't change the hackability of these pens. 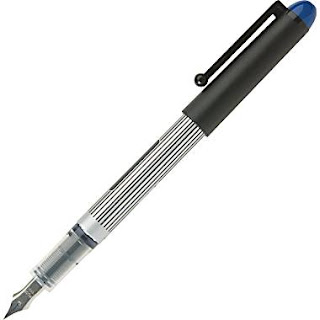 Conclusions: the Bic is a nice addition to the mix. I'll have to use it up and see how refilling goes, or if it's even possible without destroying the pen. Given the amount of ink visible, that may take a while unless there's some sneaky trick like a tube in the middle giving the illusion of more ink. I hope not.

The Varsity is an easy recommendation: it's usually available in multi-packs of assorted colors, including unusual ones like pink and turquoise, as well as staid business colors, and they really are quite easy to get into, albeit with a little mess if you're impatient for the ink to run out and try to refill early. Or so I've heard. Ahem.

Bonus tip: looking for a way to keep your cheap pens out and available for use? Haunt your local thrift shop/flea market for a glass "flower frog" with wide holes. They're generally inexpensive, and heavy enough to take a full load of pens without hassle. I wouldn't do this with a rare or fragile pen since it could damage the pen or even crack the end of the barrel, but for disposables it's perfect. Here's a crappy cell phone picture of the one on my desk, holding the pens used for this entry, along with one of my new pads of sugarcane/bamboo paper, and a ribbon tin because typewriters. What's this about penhacking? Have you started another new thing?