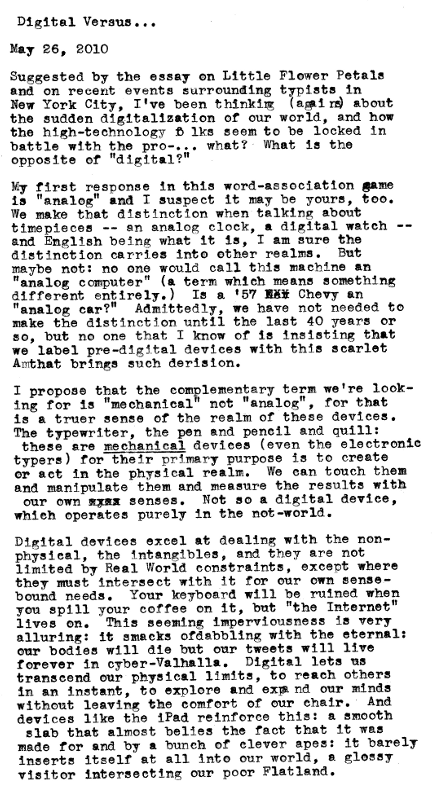 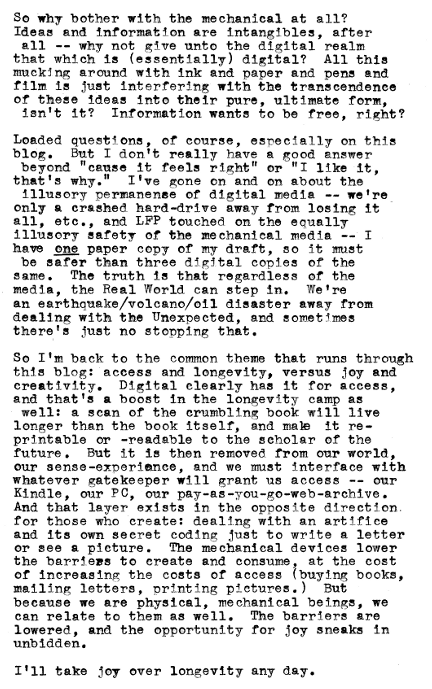 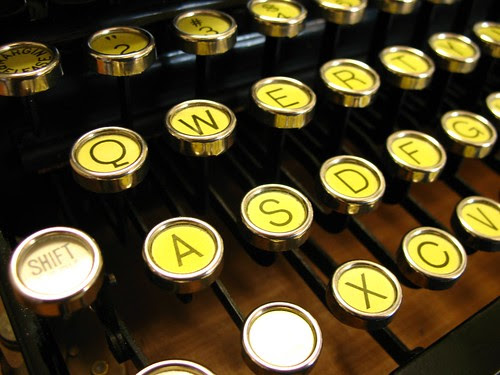 This seems to be part of many thoughts among the typosphere.

I also apply the word "mechanical," in the same sense as one would refer to a camera with a spring-loaded shutter (not electronic) or a watch that needs to be wound.

Being an archivist + paper conservator in my working life, I am crossing over the gamut of formats daily. Paper-based (and filmed) records actually have the benefit of longevity in their favor. They can be reformatted to whatever the access panacea-du-jour might be.

Researchers resoundingly prefer what they often call the "real item," recognizing the intrinsic value of a manuscript, the actual original document, handled by its creator.

As well, when the owner of a published work decorates and annotates the book's margins, it becomes something of a unique "personal record." We can do this with books, and not with a digitized screen.

At the risk of being mystical, I'm going to suggest that the allure of the mechanical is the possibility of nuance. Digital, in its true sense, doesn't mean "unreal", but more literally, "of numbers". Digital stuff is, in the current state of the art, inherently binary, and thus at its base without any subtlty. Yes/no, on/off, 1/0, without anything else. In a mechanical world, I can decide whether to where in a spectrum of almost infinite gradations whether I might press firmly or gently.

I also agree with Speculator, in the inherent value of a physical object, which has had the actual fingers of people laid upon it (and laid gently or firmly, as they inclined).

I could go on and on about why I love the mechanical world and why I use the digital world in limited amounts. Some of that discourse would echo what speculator and ravensmarch have already said. Simply, I find the mechanical world to have much more feeling and variety. I used to play drums a lot and I've never liked recording into a computer as much as onto tape. The digital programs just seem to kill all the subtle nuances. (Or maybe it's just that many engineers go overboard with tweaking things.)

Anyway, I would like to suggest that maybe digital formats aren't as accessable as they seem. I am currently reading "And The Hippos Were Boiled In Their Tanks" by Jack Kerouac and William S. Burroughs. The manuscript surfaced and the novel was released in 2008, some 60-odd years after it was written. I have to wonder, at the rate that technology is updated and changed, will manuscripts written digitally today be able to be read 60 years from now?

snohomishwriter makes a point that occupies many archivists.
Migrating data and "securing" present files via markup languages and backup servers. At the same time, we can clearly read medieval documents and view photographs from the 1840s, without intermediary.

Along with the intrinsic aspects of manuscripts, these can also be authenticated.

Great post. I think as technology marches on, the gap between physical, archivable material (and tools) and digital formats will get wider and wider.

Digital formats don't have longevity written into them. Think of all the various compter operating systems and formats that used to exist in the late 80s before Microsoft dominated.

I wonder about the archivists and biographers of the near future - for instance, a writer's career and development used to be mapped (and studied) through letters and corresponsence. Since letters have largely ceased as a written communication, will future biographers be able to get access to email accounts whose writer-owners have moved on? No, they'll likely be switched off, and all e-correspondence lost. The writers with some online presence might be studied thru past blog posts or whatever scraps of writing they've left online - but all that wondrous private inner life stuff will largely disappear. Other digital formats will replace them all - for many people - but the idea of what lasts will change too.

Other people say anything you publish online needs to be carefully worded because it's online forever, potentially (legal scare tactics, but true). But I think the fixed, physical objects will take on greater value as these digital gaps and impermancies get wider and wider and shorter-termed.

Or maybe there's a latent cultural comment in digital technology: we only keep the immediate now, we don't keep anything too long. How will you store all those gigabytes? Might as well dump it.

The fallout of this cultural change hasn't fully hit yet... but I suspect it involves a change in how we view 'inner life' etc.

rino - I've wondered about the letters versus e-mail thing in regard to studying a person's life. And what about all the text messaging and other forms of digital communication? Will a biography have to study old wall posts on Facebook to put together a functional biography on a person?

I guess the other side of that thought is that even in the non-digital days there were/are people like J.D. Salinger and Thomas Pynchon who want people to know next to nothing about them.

As loathe as I am to define something by what it is not, I prefer the term "non-electronic". "Mechanical" implies moving parts. Some pencils are mechanical, some are not. A paintbrush is not.

I used to say "non-electric" but that, too, is inaccurate. An airbrush is both mechanical and electric, but not digital. Even an early crank telephone relies on electricity to function, but has a mechanical interface.

There, too, one ought to distinguish between the interface and the media. A non-mechanical pencil or a mechanical printing press can apply words to the same paper. A car's electronic computer interfaces with a purely mechanical engine, the fundamentals of which have not changed for almost 100 years.

Though one could dissemble on the semantics of various device taxonomies 'til we're blue (one could argue that a light bulb is binary and thus digital), I think that "analog" is a convenient shorthand term that most people understand.

Maybe I should say "mechanical process" and use the old definition of a (simple) machine: lever, wheel, incline, etc.. I might have to break a sweat thinking about it, though.

Even the use of electronics gets fuzzy. Many contemporary cameras use a light-sensitive cell to set exposure, and lacking that, we use a meter (which is a light-sensitive circuit.) I don't want to go back to using extinction metering just to take a photo. The end product, though, it still that magical light-sensitive medium that we can look at and touch, after it's been chemically stabilized.

Analog is a slippery term to me: in terms of data capture, it's usually thought of as a perfectly smooth curve -- like grooves cut into a master LP instead of the digital approximations made for a CD done with Fourier transforms and other voodoo. "Analog" to me implies a certain false sense of purity or authenticity... though "mechanical" isn't a perfect term, either.

Concerning the longevity of writer's "incidentals", I think it's fair to say that digital copies will exist and be migrated as long as someone can profit by it. This puts modern discourse -- like this blog -- on an entirely different level than someone's personal letters or diary. Those would have been preserved due to personal significance or attachment, not to make a buck. (At least not right away.)

That's precisely what worries me about the digital.

I think the problems with changing formats are likely to become less of an issue as more of our content is moved into the "cloud" and as more universal standards develop. Most of the problems have been with changes in physical media, and the devices needed to read that media.

However, the easy come, easy go aspect of digital media means that many of the things that once would have been preserved for generations (personal correspondence, journals, etc.) will just be wiped out one day. Blogs, for example - don't they just cease to exist if you don't log in for awhile? And things like facebook comments are a flash in the pan. Since there is a much higher volume of rather meaningless content being created these days, maybe this isn't altogether a bad thing. But what will be left of most of our writing in a generation's time?

And even what *is* preserved is less meaningful, in a way. There's a disconnect. Reading a digital reproduction of text someone I admire typed is a far cry from reading words they wrote by hand, their hand on the pen, their pen on the page. Real. There's a human element there no digital text can capture.

And unlike the digital, they take a real effort to destroy. Yes, they are harder to backup, and fire and water and time can eliminate them, but it takes something real to destroy the real, not a simple keystroke or a cold server purge routine.

But I think I'm straying from the original point of your discourse into a continuation of my thoughts on my own blog.

snohomishwriter - I think the concept of a biography cobbled together from public Facebook posts is chilling, totally representative of our time, and a challenge. Fire up the Remingtons! It will be an indictment of modern culture, sure, but such things are better handled by analogue/mechanical means anyway.