As I mentioned in my previous post, I treated myself recently to a new pen, which I pretended I needed long enough to start researching obsessively, as I do. And in under a week, I'd actually made a decision -- a new record for me! Presto, the Lamy 2000 in artistic hipster square-o-vision. 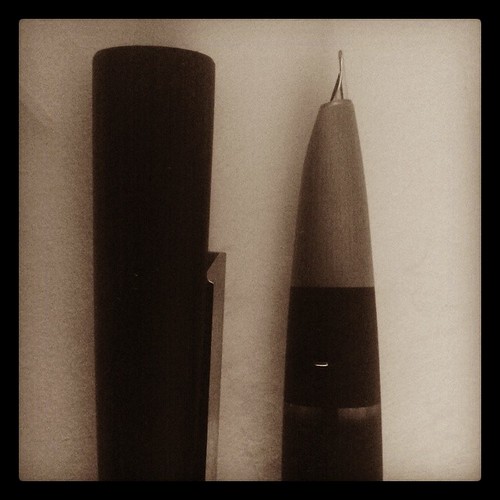 The last two times I did this, I agonized for months over the decision, finally getting -- and being extremely happy with -- a Pelikan m205 in bright red, and later, a Pilot/Namiki vanishing point in blue and chrome. There's aspects of each of those two that I like and maybe having other examples of "real" pens around made the decision easier. Or maybe I just was impatient. So in the timeless tradition of the chronically indecisive, I made pro/con lists:

- plastic: model is the low-end of the Pel line (but +light in the pocket)
- smallish: I've got big hands, and unposted, the pen is a shade short
- unsubtle: when subtlety is called for, a bright red pen is not it (but I love it)
- two-handed: I don't post, so the cap has to go somewhere (other hand, usually)

And the vanishing point is almost a perfect complement.

+ brass and metal: a hefty pen, it feels real in your hand
+ a good size, too, for me
+ classy styling, and deploys with a click: an ideal meeting pen
+ excellent build, and love watching the nib deploy and retreat

- ink levels are a mystery: even using a converter instead of a cartridge
- so refilling = disassembly, as with most cheap pens, and this is not a cheap pen
- nib updates means buying the whole inner assembly again
- heavy in the pocket, comically so in a breast pocket unless clipped securely

They are both in rotation at work, swapped in as the mood strikes. I have a couple of recurring meetings each week and always take notes, and the Pelikan has never let me down by running low on ink, ever. The VP is ready literally at the press of a button, but I have to make sure to perform the take-apart/refill/wipe ritual before I leave my desk, or pack a second pen for backup.

Here's my impressions after the first few days, in mixed pro/con form:

+ ink handling: it's piston-fill like the Pelikan, so most of the interior is devoted to ink storage, thus I'm still operating on the first fill-up

- ink levels: warnings about the comically-small ink window are true, so we'll see if I can tell when the well is about to run dry

+ fit and finish: excellent, and the barrel material is prepared in such a way that it looks seamless, even at the end where the piston button seats

+ size and heft: it's comfortable and large enough even in my hand, but not super-heavy either -- right between its two drawer-mates

+ style: the 2000 is so subtle it might as well be a magic marker, and is easily mistaken for one with the cap on. "Pregnant Paper Mate Flair Pen" would be how I'd describe its looks, but in a good way, if that makes any sense

- upgradeable: not so much. A new nib means pen surgery, which is doable, but doesn't appear to be Lamy's intention. Buy a Safari instead if you want to swap nibs easily, or a second pen... :-)

- two-handed: the cap has metal tabs inside to secure it, and it looks like these will quickly scrape up the barrel when posting. So no, the cap goes in the non-writing hand with this pen for certain

Criticisms that I heard but haven't experienced:

The cap has to snap on to something, and on this otherwise blemish-free pen, there's two spring-tensioned metal tabs or "ears" sticking out on opposite sides of the section. They happen to be at or near where one grips the pen. This evidently aggravates some owners to the point of distraction, a la the Princess-and-the-Pea.

Oh, they're there all right, and my fingers rest against one of them, but I've not found them distracting, and have been using them even to get the pen aligned properly to writing. Plus, I own and use a vanishing point, which is the ultimate in the having-something-by-your-fingers lifestyle. Not an issue for me.

These reports look intermittent, but are vocal -- "I expected better from Lamy, had to send two of them back, etc." Maybe it was a bad batch, or a particular owner with different expectations… who knows. I did flush out the inside of my pen with plain water a few times first (see below) and some of the complaints about dry or skipping nibs noted that it resolved on the second fill. As we know from typewriters, a good gentle cleaning rarely hurts anything.

Inner twelve-year-old aside, there's observations that the refill mechanism is difficult to work. Is it? It's got to be air- and ink-tight, and I don't think it's worse than my Pelikan's piston. Again, I flushed with water first a few times, to chase away any residual oils and inks leftover from manufacture and quality control testing (some blue ink showed up, so I know the nib wrote at least once.)

Interestingly, using the Lamy has given me another point of comparison, this one for the Pelikan and any pen that refills with a threaded cap:

I don't know how I did it, but there's dried ink inside the cap threads on the Pelikan, probably from brushing up against the lip of a bottle while I was refilling. There's no such issue on the Lamy, as it's smoothness all the way down.

I've heard it's possible to get a fine amount into the grooved texture that's polished into the barrel, but it seems like it cleans up better. It's something I never noticed before now, since I'm usually messing with converters and a partially-disassembled pen or syringes and empty cartridges.

So, is there a clear winner? Not yet for me. I like all three, for different reasons, and for different uses. The Pelikan and Lamy overlap the most in terms of function and usage, and it may be that one goes home to use for marathon writing sessions, and the other stays at work for marathon meetings. It never hurts to be prepared!
1 comment:

Email ThisBlogThis!Share to TwitterShare to FacebookShare to Pinterest
File under: inky fingers are a sign of good breeding, lamy, pen nerd, pen review 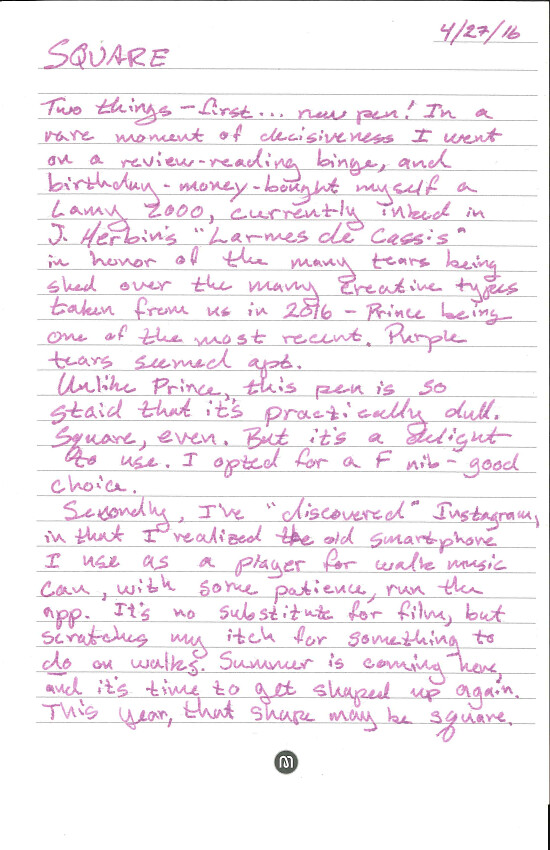 Like many social media spots, I'm hanging out as @mpclemens on Instagram if you long to see random abstract blown-out tilt-shift carefully staged snaps of my breakfast cereal, or whatever one is supposed to Instragramify.
1 comment: