I've taken to carrying a few index cards and a small pen around all the time, to jot down the million or so to-do items, shopping lists, and "remember to talk to ..." reminders that flit across my brain at this time of year, at the confluence of youth sport and big-projects-at-work seasons. I am still deftly refusing to go the smart phone route, opting for the dumb-slab approach to keeping on track. Here's my dumb-slab: 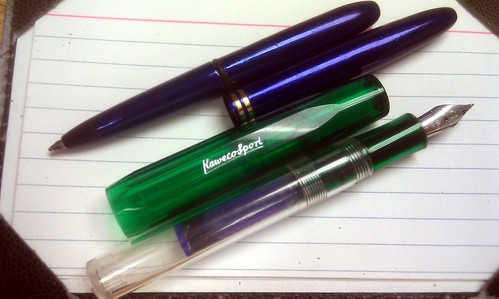 An inexpensive "index card briefcase" that someone gave to me a few years ago, and a pair of pens: the blue one is a bullet-style Fisher Space Pen that I've had long enough that, by eBay convention, now gets to be called "vintage," and a gift-to-myself Kaweco Sport fountain pen. A few thoughts on each, with each. The scanner did a hash of the Space Pen with its boring black ink. It's actually far clearer in real life than this would indicate: 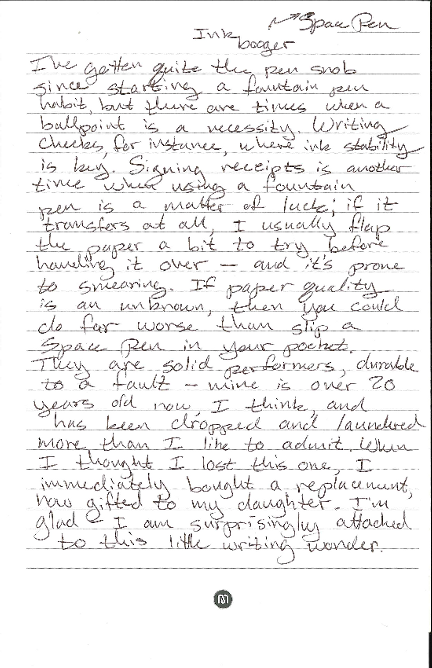 With the sports team, I've been doing a lot of check-writing and invoice-signing and general scribbling around, and for that, the Space Pen is unequaled. It's tiny, so I can stow it in my shirt pocket, and because of the pressurized ink cartridge and the magic ink, it's always ready. As a regular fountain pen user, I forget about the obligatory get-the-ink-flowing scribble that one must do with cheap stick ball pens (and not-so-cheap ones, too.) The Space Pen is always ready. I don't need to write upside down, or under water, or in space, but I do need to write things quickly, and in limited space, and on-the-go. Try filling out track meet paperwork with a fussy pen while escorting a line of 8-year-olds. NOT A GOOD IDEA. 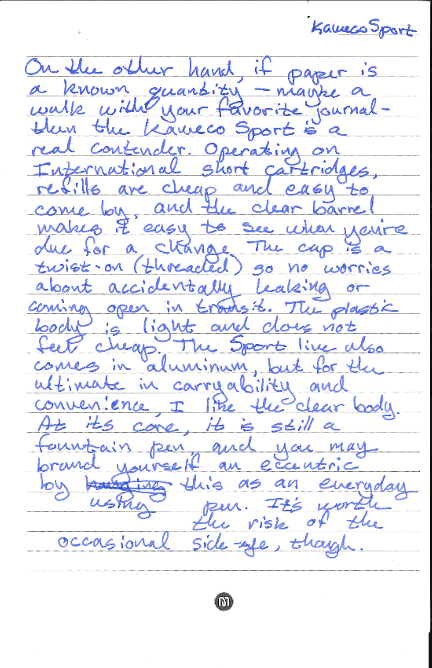 The Kaweco was more of an indulgence buy, using a holiday gift card given to me for the always-dangerous enablers at Jet Pens. It was more of a "rounding-out-the-order" buy than filling a specific need, but it's proven itself a fine contender when I have a little more control over my writing environment. I'm still a pen snob, proudly so, and I have no issues fussing with nibs and inks and the whole post-versus-non-post agony. For the record: I'm on #TeamNonPost. Like the Space Pen, the sport is small enough to live in the bottom of a pocket, with no clip to snag. It's not so precious that you feel bad letting it knock around with your keys and wallet, and it's got little touches that make it a fine choice. Swappable nibs, for example, a twist-off cap cap with faceted sides to prevent it from rolling around. I'm a sucker for demonstrator pens, too. ("Look at the ink!")

No pen is perfect, though. The Space Pen -- or correctly, the knock-off refill I am using -- is prone to "ink boogers" around the ball after a period of disuse. I suspect this could be related to the heat of riding in a pants pocket, too. The Space Pen is always easily lost, given its slippery-fish finish. My own example went missing literally in two seconds -- I had it, and then suddenly I didn't. (My wife found it at last, as all excellent wives do for their klutzy husbands.) So upset was I that I finally bought another. Evidently Fisher has started putting a little grip section on the pen, and... I don't like it. Try looking at product shots on Jet Pens. I don't think of myself as sensitive to that sort of thing, but after growing used to the smooth grip of "my" pen, I found it hard to adjust. The new one is my daughter's now, and we'll she what she says.

The Sport I've found to be something of a dry-starter. It writes fine and fast once the ink gets moving, but there's a little refill-squeezing to get the ink down into the feed and the nib. I'm not sure what's going on here, as I'm using the refill that came with the pen. Luckily, ink mysteries are one of the things that fountain pen users secretly love to fuss over, so I'm not too bothered by it, not really. The cap doesn't have any air holes in it, so it's not drying out that I can notice. Kept on its side, it starts right away, but I can't guarantee that sort of storage, bouncing in a pocket or rubber-banded to a journal in a bag.

Finally, nether pen is a very graceful poster -- that is, sticking the cap on the non-writing end. The Space Pen is really so very tiny that you almost need to post the cap, unless you're gripping it in your fingertips, like starting a fire with a match. Which, incidentally, is pretty much how I write with it, keeping the cap in one hand and scribbling with my claw-fingers perched on the barrel. Apologies to all past teachers who tried to show me the One True Light of penmanship: it didn't take. On my Space pen, and on the new variant now in my daughter's care, the posted cap want to work itself off the end a bit, unless you really jam it on. And it's a polished surface trying to grip a polished brass (?) inner ring... so no dice. It tends to work loose no matter what I try. The Space Pen has a small rubber O-ring sealing off the halves of the main pen and helping the cap stay on a bit with friction. Something like that is needed when writing, in my opinion, though I don't know how it would be engineered.

The Sport has the advantage in the posting-the-cap department, I think. The facets bring the overall posted diameter up to something like a "real" pen, and I would imagine that the aluminum models (the "AL Sport") also get a bit of weight balance with the cap hanging out there. I personally think it looks like the skinny barrel is being swallowed whole by some large green worm, and just keep the cap gripped in my non-writing hand as well. Pro tip: keeping the cap is is a good way to get your pen back when it's borrowed briefly. I would not say "no" to a donated AL Sport just to make the comparison complete. Are you listening, Kaweco/Jet Pens? I can be bought, so very, very cheaply.

So, which pen is the winner? Currently, I'm giving the edge to the Space Pen. I was very distraught to lose it, in part because it was a gift, and in part because it's becoming my always-got-it pen, ready for any mundane job. The Sport is seeing less activity right now, but it's got a place in my writing arsenal, and certainly has a greater range of ink choices... and no boogers.
2 comments: