My Daughter is Kicking my Ass

...at games, that is. My youngest child (age seven) is on some kind of massive board game bender right now. We don't have anything Hallmark-y like an actual Family Game Night or anything, but we do have numerous bookshelves, and at least one of those shelves is jam-packed with games. As the kids have aged, the selection has improved. I will be a happy man indeed, for example, if I never have to sit through another round of Candyland ever, ever again, and my eldest's much-loved Toy Story Monopoly Junior is buried in the back of the closet where it will hopefully remain out-of-mind until the heat death of the sun.

Gradually, gradually, we have been able to replace these games of chance with more strategic and less luck-based fare. Mancala is a great one, because the rules are dead simple, and it contains a good mix of surprise and strategy (sometimes with directed help from dad. "I'm about to take these pieces unless you move them...") I know it gets disparaged for being the token "wacky" card game, but all my kids honed their ruthlessness to a fine edge playing endless two-player hands of Uno during sibling soccer games. We pulled Sharp Shooters out of storage recently, which is basically Yahtzee with more visual scoring and the pleasure of being responsible for sixteen dice. And we've even been playing Sorry! quite a bit, once I learned that it goes from a boring luck-of-the-draw game to a ruthless slapdown simply by dealing out a small hand of cards to every player. It was a revelation. Castle Keep is quick and easy, when the dog doesn't decide to lay down in the middle of the playing space. There's little want for unplugged entertainment at our house.

When any of the kids seem to be having trouble sleeping, my wife and I joke -- not untruthfully -- that they must be in the middle of learning something. We saw this when they were infants, discovering their hands, and rolling, and learning to crawl. We saw it when they were walking, and "talking" with us via baby signs (yes, we are those parents), and we see it now and then when they're mastering the bigger concepts: multiplication, vocabulary for their Spanish class, some new piano piece. You can practically hear the gears turning in their little heads.

With the exception of my 5am NaNoWriMo ritual of me + typewriter + dog + weaponized coffee, I have been sleeping soundly. Not a peep from the kids at all, which is why this sudden turn toward games and gaming has caught me off guard. We've been spending hours lately, moving tokens, dealing cards, or hoping for a six in Catan: Junior (because a six lets you move the ghost pirate, duh.) It's becoming something of a mania with the child, and of course we want to encourage this. It's harmless, is probably honing some skill or the other, and it's good for her to learn how to lose gracefully, because if there's one thing I do not do, it's coddle the kids. Once we've put Plumpy and Mister Mint and Gramma Nut and all the other horrors back in the box, the figurative gloves come off. I may point out weaknesses in the defense... for a little while. I do not play Daddy's Little Princess checkers. You want non-competitive? Do a jigsaw puzzle (though I get the last piece.)

So not only has the youngest been playing ever single game she can get her hands upon, and asking about those she can't (Monopoly, garrrrgh), but she is completely kicking my ass. Either the dice hate me, or she's skimming from the bank when I'm not looking, or she's genuinely, actually good. Is it possible to be a prodigy at Uno? Any scholarship opportunities in this? I'm asking for a friend.

I'm not even talking about video games, where my dwindling reflexes and Lack of Caring render me helpless to all three of my spawn. (Lego Pirates of the Caribbean, I'm looking at you.) I'm being outclassed and outgunned by a person still waiting for her permanent molars to come in. She's learned a victory dance from her mother. It's brief, but it stings, oh, how it stings.

I couldn't be more proud. 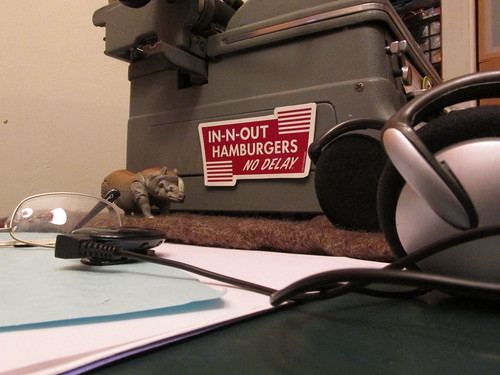 We're one third of the way into November, and the dreaded "week two Sucks" of NaNoWriMoare chipping away at the Typewriter Brigade. It's hard enough to stay motivated to write every day, but week two is when the realization hits home of just how bad a fast-written first draft can be. I've reached the point where I drop missing words into sentences after the fact, and then re-start the sentence again. Pessimistically, I'd say my word count is over-inflated by a third. Edits are going to be brutal.

In a more coherent time (i.e., October) I got contacted by the NaNo organizers about the Typewriter Brigade. I'm quick to point out that unleashing this thing on the world was not my doing -- blame is still laid at the feet of the one they call "Duffy Moon." But I have wheedled myself into being an annoying cheerleader of sorts, in this great beast-without-a-head that is the annual running of the Brigade.

I have a slight problem with self-editing, and the NaNo blog had limited space (I guess? It's a tumblr, so... bit conservation.) Here's the hit piece as published on their blog and below follows the original replies I sent them, less one "secret" question for the next interviewee, and with some answers I cut down for space before submission.

Despite being largely camera-shy, I am happy with the way the lead photo came out -- a selfie, no less, with everybody's favorite tiny rhino pal. Black and white photos really accentuate gray hairs, don't they? Hmm. Added bonus: the uncropped photo of my writing space, which shows the utter blandness and mild grubbiness of our coat closet. Enjoy. 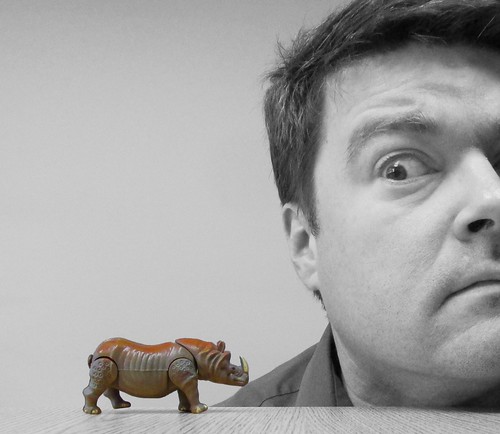 1. Tell us a little bit about the Typewriter Brigade and what makes it great. Tout it like crazy.

The Typewriter Brigade is a worldwide group of typewriter enthusiasts, smooshed together into a moderately dysfunctional noveling family. We offer advice on machine repairs and restoration, encourage impulse machine buying, and try to slog through a high-velocity month in low-technology style.

Occasionally we even get writing done.

2. What do you think is the best thing about noveling on a typewriter?

There are a lot of benefits, but the biggest one is no distractions. It's simply not possible for me to waste my writing time by fooling around on Twitter or the forums when I'm typing, and thank goodness. I have the attention span of a gnat.

Having no "Delete" key is a huge benefit, too, and because I'm such a poor typist, every typo equals a free word. The end-of-line bell is a wordcount cheerleader, and I've never managed to crash a typewriter or run low on battery.

3. What is your favorite typewriter model? Geek out a bit; we don't mind. We encourage it, in fact.

My personal favorite is the Olympia SM3, which is a portable typewriter from Germany built in the 1950s. It's built like a clock crossed with a tank, came in many colors, and is very stylish with lots of chrome. I own a few of these. My wife wishes I collected something smaller. For write-ins, I take a Smith-Corona Skyriter., which was designed to be portable enough to take with you on an airplane or use on your lap.

My main NaNoWriMo machine is a battleship-grey 1952 Royal KMG typewriter I call "the Beast." It's more work than using a computer keyboard, but I find it very satisfying, and once I find my typing rhythm, the words really flow. Since there's no delete key, every typo becomes a wordcount boost. This is a secret Brigade bonus. 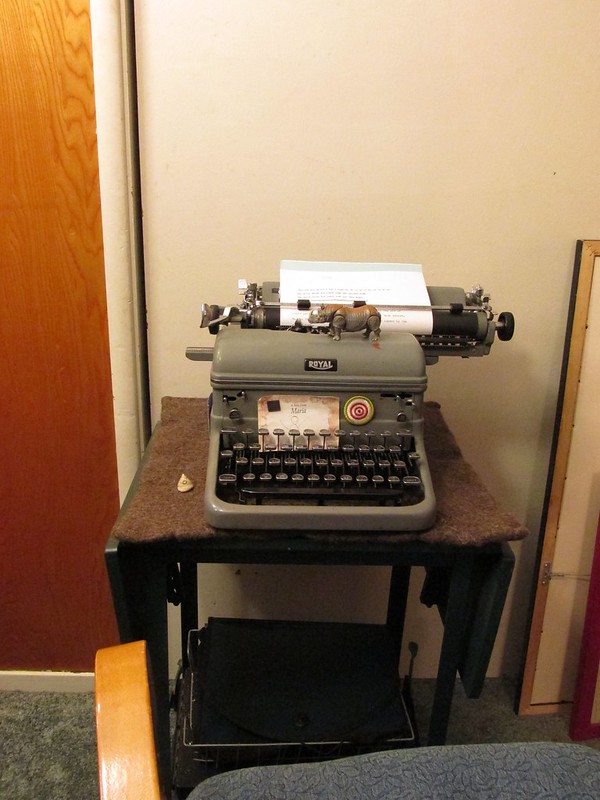 4. Tell us a bit about where you, specifically, are writing from this year.

I'm in Pleasant Hill, California, in the San Francisco Bay Area, just over the hills from the OLL. Go team East Bay!

The Beast and I set up in the family room, wedged behind the sofa and facing the coat closet. It's the most boring part of the house, and as far from the bedrooms as possible so I can get my writing in before the kids wake up and start demanding breakfast and rides to school and other selfishness.

6. Introduce us to the NaNo Rhino!

He appeared one day when I said "NaNoWriMo" into speech-to-text software and the computer heard "Nano Rhino." He keeps hanging around, living in the typewriter, making plot suggestions and demanding strong coffee in tiny cups, gourmet chocolates, and frequent belly rubs.

Shockingly, many other Brigadiers have discovered Rhinos living in their typewriters, and pictures of them often show up in the forum. The Rhino is a combination good luck charm and grumpy muse. Nano Rhinos grow wings when their Wrimo caretaker reaches 50,000 words. They molt and come swaggering back every November wingless and demanding snacks.

7. What is the best piece of writing advice you've ever received?

It wasn't directed at me personally, but Anne Lamott's Bird by Bird is one of the best books on writing that I've read. The essays on getting started and on first drafts are on my pre-NaNo reading list each year.

In general, I like reading advice from writers who sound a little neurotic and not entirely in control. This is the kind of help I can relate to.

8. What is one piece of advice you would give to a nervous novelist who may or may not be reading this post?

If you're not reading this post, go back and read this post! It's full of excellent words arranged in an entertaining manner.

If you are reading this post, my advice is: don't delete during November.

If you are unfortunately forced to use a computer for NaNoWriMo, remove the Delete key or glue a tack to it or do whatever it takes to not remove anything from your draft. Turn off the spell check and the grammar check and the Internet. Keep every sentence, especially the ones that you are sure are boring and useless and pointless.

I am often surprised to discover that the horrible, awful, terrible pages I wrote in November got much better when I was brave enough to read them again in December. You're too close to make good decisions in November: keep it all and revise later.

9. What is your weirdest writing experience?

I am usually a big planner, with outlines and index cards and plot figured out in advance. The weirdest moment for me -- and this happens every year -- is when my characters ignore all that hard work and do whatever they want to do, and change the story around. To a hardcore planner, this was very upsetting the first time it happened. What about the plan?! The outline?! Guys! Come back!

Now I've learned that this is normal, in a kind of hearing-voices-in-your-head way. It's a great feeling when the characters run things and I just copy it down. It's still weird, though, having them take over my brain.