So I generally shy away from politics as a rule: I won't discuss them, I don't usually give my opinions on various candidates and issues, and keep my voting very close to my chest. This year's election is different-ish, for two reasons.

1) I'm not sure if it's because my child has reached voting age, or because the interconnectedness of the world has dramatically changed the landscape, or if I'm (heaven forbid) starting to finally resemble an adult, but I'm pretty excited about The Whole Process this year, to the point where I even put the primary election schedule up on our refrigerator at home. Perhaps this labels me as a Wonk, but I'm following things much more closely this year than ever in years past. I suspect, though, it's mainly because of

2) A certain candidate who has managed to evolve from harmless blowhard to punch line to actual potential candidate. I won't mention his name, but it rhymes with "rump" and "dump" and oh I can barely even joke about it. I personally skew on the liberal side of the ballot, but hey! I live near San Francisco, California after all. It's practically required. And I will admit to a certain amount of smugness in the early days of the process, as if anyone could seriously consider such a toxic, bigoted, self-absorbed, pandering egoist as He Who Shall Not Be Named. A little disarray can be healthy now and then. But what nobody counted on, I think, is the breath and strength of the disorder. The populist appeal of a demagogue in a supposedly well-connected, well-informed America. But he's playing the media like a fiddle, and the media happily dances to his tune, because it's great TV.

And somehow, inexplicably, inexcusably, he continues onward. It's no longer funny. It's become a train wreck, watching this self-inflating wind sock of a candidate flap around in whatever direction the breeze is blowing. And during those rare quiet moments, he manages to puff himself up and generate his own breeze. It's an ugly wind. It stinks. No matter what your political inclinations, it's blowing up trouble.

Now we're on the cusp of "Super Tuesday," a day when major decisions are made in several states, determining the future of many of the campaigns. I'm a little sad that California's primary is still way out on the calendar in June. There's a certain feeling of being last to the buffet line, after everything has been picked over by the rest of the country. But this year more than others, I'm despairing at the choices being left to us.

For a short while, I, like so many other reckless young men, flirted with the idea of becoming a mathematician. Luckily I was pulled from the brink by a faculty advisor and an intervention by friends who weren't so fortunate. (Intro to Organic Chemistry was their downfall. I got out just in time.) Anyhow, one of the few things I took away from those fateful months -- other than the nagging sense that I used to know how to do things like find an integral, three times a week at 8:00am -- was the notion of dimension and projection. This is hopelessly mingled in my mind with the other classes I was taking at the time, including a few philosophy courses, so Professor Polt is likely to grade me on this. I'll try to get the essay done while he's still lagged from travel.

In essence, when you're losing a dimension, you're losing information. You're seeing, in essence, the shadow-of-a-thing, projected there on the cave wall, and not the Thing itself. This came up a bit in those forgotten math courses of mine, and tragically for me, in a later computer graphics course when we talked about representing three-dimensional figures on a two-dimensional screen. (This was tragic because it threw me back into linear algebra again, after I'd worked so hard to stay clean.) You lose something, of course, when you try to show a 3D ball on a 2D monitor: the "back" of the ball is gone, flattened out and masked by the "front" of the ball. After the projection, there's no going back. The information is lost.

This is a very long-winded and rambling way for me to rant about trying to copy and paste something off my tablet, which I'm actually typing this upon, with a fingertip, which was a disaster. Left on its own, a single finger is a poor substitute for all ten working together, and I genuinely do have empathy for my fellow comp-sci graduates (and math refugees) for trying to write software that can properly derive user intent from a wobbly fingertip. I certainly got to see this in action, as I watched the poor tablet sweep through menus and settings while I tried to highlight a small section of text to email to somebody. It was a UI disaster, no matter how I tried to sneak up on it.

And that's why I broke out the keyboard, and took a second to do what I wanted with minimal fuss -- each key mapped to the action it represents, not projected down into the pitiful low-res representation. It's no wonder I cling desperately to my keyboard-enabled phone, after comic text-attempts from my wife's keyless phone "Pick up egos, molt, and very from store" is her phone's shadowy projection of "eggs, milk, and bread." The ideas are flattened out by the process, and information is lost. And personally speaking, the fingertip-on-screen barrier is annoying enough that I won't try to do that again.

I wonder if this will turn us into flat-thinkers, too? I see it, to some extent, with my eldest child. He and his friends have marathon chat sessions, but they're largely photos and short bursts of video (a technology we would have loved, back in school, no matter how much information was lost.) Text and words are a dimension that single-fingers alone are poorly situated to navigate.

(Subtitle: "Hey Ted, that was kind of brilliant")

So, this happened tonight: 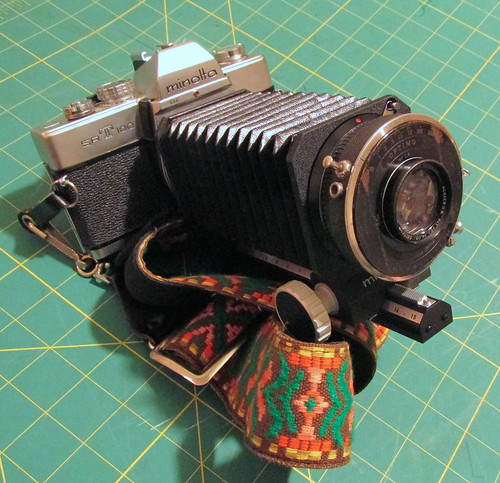 Thanks to a cheapy body cap, some short work with power tools (ooh, power tools) and an old set of macro-photography bellows that I inherited, I bring you operation "Great googly moogly, this might actually work." The bellows adjust for the long focal length of the lens perfectly.

The lens is just resting inside the hollowed-out cap at the moment, since the threaded ring that held it to the board was too large to fit inside the new mount. I'm going to look at options for this -- maybe a rubber ring to friction-fit it into place, with some tape to be extra sure? I don't want this to be a permanent attachment. And I need to get into the shutter mechanism again to figure out how to get the "T" setting working again so it doesn't require four hands to operate.

Dang. I've almost finished something I started. I may have to walk away for a year or two just to pace myself.
2 comments: