Reflexes, Resonance, and Focusing on Infinity 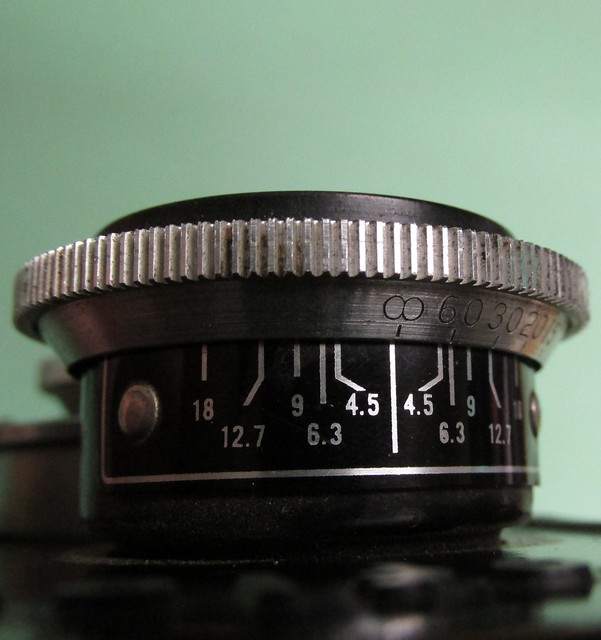 See note for photo pedants, below 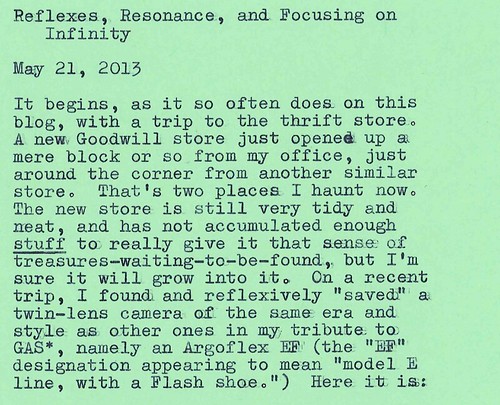 * GAS = Gear Acquisition Syndrome, a plague of the camera enthusiast 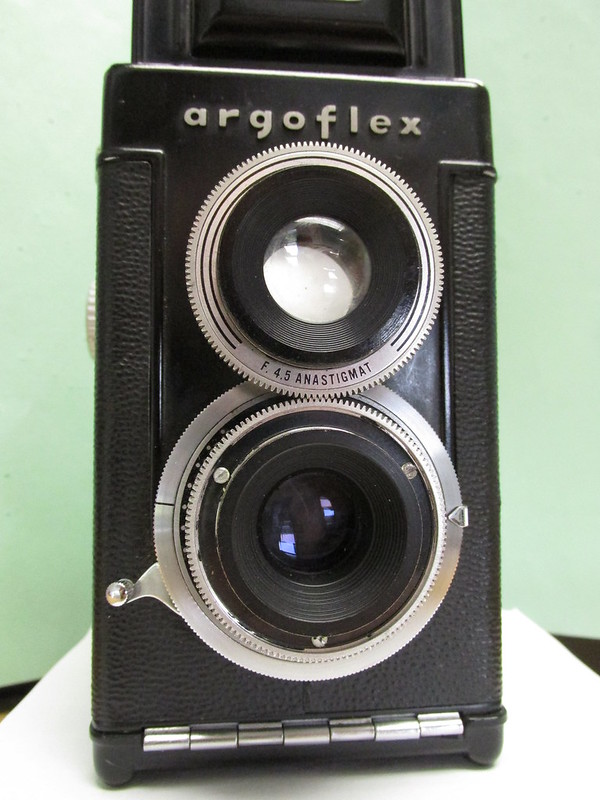 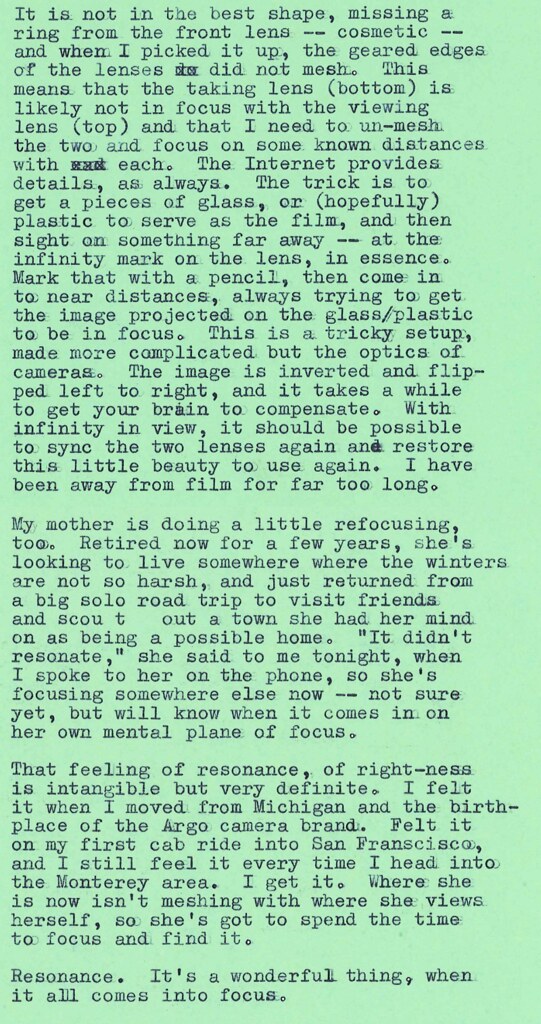 It's been far too long since I pulled out a typewriter and whipped up a typecast. I hope not to stray too far from what I consider to be the core act of a Typospherian. This was banged out on the first machine I had at hand, a locally sourced Olympia SM3. It's good to see that I have not forgotten how to make typos, though all the shadowing does tell me that I'm slow to get my hands out of the way of the keys. "Argus" is the camera brand, not "Argo" as my brain insisted. Other typo corrections are left as an exercise to the reader.

I see many of the blogs in the 'sphere are turning cameraward now. Maybe it's just because summer is approaching here in the U.S., and so one's thoughts turn naturally towards being in a dark room splashing around in cool water. The natural pungentness of the homebrew Caffenol-C developer does mean, though, that your dark room should be well-ventilated. (And while we're on the subject, ye gods do my kids look little in those old photos. Five years!)

Other photo bloggers: what are you using for fixer? Seems to me that was the only part of the process where I had to "go commercial" and just used a fixer concentrate. When that finally ran out, I set everything on the shelf again, and then evidently got busy for half a decade.

Film really is tremendous fun, and black-and-white developing is a large part of that. It's alchemy, pure and simple, turning light and microscopic silver particles into art with nothing more than coffee and soap.

The Argoflex EF (says the Internet) is a metal-bodied version of the earlier Bakelite model E and some variants. It's pretty heavy, reminiscent of the Argus C3 "brick" camera that shares the same simplicity and meshed-gear design. It's a basic design, compared to the far fiddlier -- and honestly, much nicer -- Rolleiflex cameras that I inherited from my late grandfather. I would not be afraid to take the Argoflex out to the beach, for example. It does take 620 film, but true to the Typospherian spirit, modern 120 film can be wound onto old 620 spools to fit.

Note for photo pedants: yes, I know this is not how one technically uses the infinity mark on the lens. Although this may be how one sets it for getting the focus coupling sorted out.

For those not in the know, you line up the marks on the lenses with the setting of the aperture -- the opening -- to find out the depth-of-field of your photo. Closing the aperture into a small opening allows a broad depth-of-field, or basically a photo that's in focus for a much of the distance (think landscape shots.) For sweet "bokeh" effects or to bring one area of the picture into focus, you open up the aperture and line up the marks accordingly. Aperture settings are marked in pairs on manual focus lenses. On this camera, the aperture settings are:

If I were set up for a real photo, that infinity mark should be lined up over one of these settings. For philosophical reasons and because the light was better :-) I put the infinity mark at the central line.
4 comments:

Tony posted a question in the comments of the previous pencast entry:


I'm curious about the perfect width of what looks like an italic nib.

Well-spotted: it's actually a hybrid of a Pilot Knight fountain pen with the italic nib pulled out of a Pilot Plumix italic. The Knight was a Staples clearance find (I think it's discontinued?) and the Plumix came from Target. Both are cartridge/converter pens, and of course, Pilot has a proprietary refill (grr) that is at least easy to refill (yay) using nothing more high-tech than an eyedropper or in desperation, a coffee stir-straw liberated from the office break room.

It wasn't until relatively recently that I discovered that both have the same nib and feed, so they could be swapped out with relative ease. I've had enough practice pulling the nibs out of Pilot's Varsity pens that I assumed the process would be much the same: start with an empty pen, wrap the nib and feed in paper towel, grip firmly and pull straight out.

The Plumix is more useful to me now as a carrying-around pen, since the thinner nib sips ink instead of guzzling it. The now-italic Knight stays at my desk, and the nib is good for pencasts, or for notes where I'm never far from an ink bottle. The nib runs a little dry, and tends to skip when the ink gets low in the cartridge, two fact that frustrated me when it lived in the Plumix. Plus, I like how it tarts up my handwriting. I've always had a weakness for calligraphy pens for the same reason.

Now both pens are getting more use, which is a happy day indeed.
No comments: 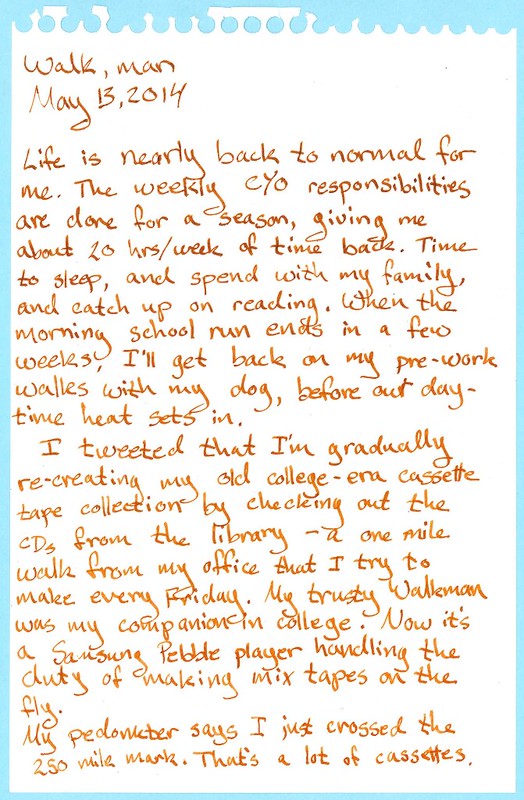 And just like that, a month goes by between updates. Somehow it never feels like it's that long away... and then it is.

So, I'm back, in some capacity anyway, and hoping to put the newly-freed time to better use than what I've been doing lately, which is loafing and playing way too much pinball. The weekly library walk is a good sanity-maintainer, as it's something to look forward to in the work week and good exercise for the largely sedentary lifestyle of someone who makes his living behind a keyboard. Our library system has a number of branches and a particularly excellent online system for reserving books and having them ready for pickup at any branch. I don't know if this is the norm now, but it's incredibly convenient.

That cassette collection (of questionable taste) lived in one of those huge zippered nylon cases under the bed in my dorm room, and was fed at first thanks to the largess of the back catalog of the BMG Music Club (12 albums for a penny!), by careful duplication of friend's cassettes, and then in years later, by legging it to the library to riffle through their CDs. Some of those old albums are permanently embedded in my brain with the place, so (for example) the tape I made that backed Naked Lunch with Different Trains automatically takes me back to a late-night drive across central Indiana to pick up a friend from the airport. Some of the more regrettable 80's pop songs are instant time-travel back to college years, walking around the pond near campus just as autumn was turning and all the sugar maples dropping continual showers of orange and yellow leaves. (This ink color is close, but nowhere as vivid.)

Scent is a powerful memory-trigger, but I think music is an actual time machine for your brain.
4 comments: