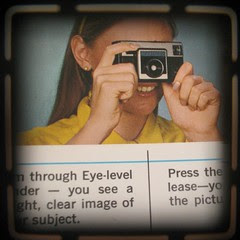 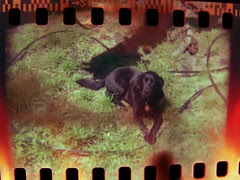 Let's consider:
What's most magical to me, though, is the areas between the photos. You can get a little glimpse of this on the sides of this picture, but all between the shots it's cloudy and hazy, like gaps in memory only sliding into focus for certain moments -- the dog resting in the yard, my daughter as we're taking a walk together, the big ornamental cactus that grows down the street. The gaps are necessary due to the way 126 film was made (one hole per picture) and I overcompensated on this first roll, but the net effect is... wild.

The Garanimal flare pants made me laugh. Ah, the contrasting topstitching.

This picture is otherworldly.

I've got some photos of me celebrating the Bicentennial wearing a zesty little plaid combination that never should have been. *shudder*

I've tweaked the otherworldly picture a bit more now, so the colors aren't quite a far off. Those between-photo gaps are still very strange.

I enjoy your blog, as I am an avid photographer using mainly film and pinhole cameras, and also a mechanical typewriter fan. There's also mechanical pencils (0.7mm my favorite lead) and fountain pens (my Pelikan piston-refill being my most prized, and most useful for actual writing -- with the bottle of Quink blue/black ink handy I can write for hours.)

My first camera was a Vivitar Auto-110 with flash. I still pine over 110 film, it's very similar to 126 in that it's cartridge loaded with a backing paper. One could still acquire 110 film from Walmart until early this year, reports being most stores have discontinued their stock, but they still send off the film via mailers for development in a lab in Denver.

Hi Joe, thanks for the kind words. I never had a 110 camera, though a couple of my siblings did. Same idea as the old 126'ers, and there's even a clever pair of Instructables for cutting down your 35mm film into the 16mm size, and then popping it into an old 110 cartridge. This seems like a much larger amount of work, though, since you'd then need to deal with processing the stuff. I'm tickled with the results of the Instamatic conversion, though. I'm going to have to give it another try.

Wait, you never actually used a typewriter for everyday life?!! How can this be...

Magicubes!! I have a picture of me sitting in a pile of magicubes and Hot Wheel tracks when I was what, 3?

Except for my grandmother's old portable Underwood that was housed in my room, I wasn't around them much, although I do remember typing up a school paper around 5th or 6th grade or so, right before the home-computer boom hit. After that boom, all my teenage angsty behavior was channeled into programming my own cheesy Dungeons and Dragons-esque games.

Oh HELL yeah did I know how to get my nerd on.

I've been reading your blog for a while now and love it, especially the typecasts (I own and write on a typewriter myself). But this is the first time I'm commenting, because although I usually prefer to stay in the woodwork, I have to ask - how did you digitize that? I've had the hardest time with a situation similar to yours (using 35 mm film in a camera not meant to it) - none of my camera places around here will print it, just develop it, and I don't know where to go from there. Let me know, and if it's a trade secret and you don't want to share, that's all right too. Keep on truckin' - J

@succedanea, I digitized that negative by the lamest means possible: I took a digital picture of it with one hand while pressing it up against a window with the other, and then tweaking the colors in The GimpA better method would be to get something to hold the film in place, and use a little tripod for the camera. I've seen a DIY setup that does this with a cardboard box, I'll be giving that a try.

As for developing, you may have to ask a manager, but most places will do a "negatives only" option for you if you ask. The really nice ones will even leave the negatives uncut for you, if you're winding the film through something else, like a big folding camera. I've since got the clerks at Walgreens trained to recognize me when I walk in, but anymore I ask for "negatives only developing, don't cut them." As a bonus, it takes less time, and is far cheaper, too -- about $2 for processing only, vs. $7.50 for processing + prints.

Thank you so much! That was actually really helpful - I just didn't even know where to begin. I'll try my hand at fiddling with the gimp too - you say it's the lamest but hey, it obviously worked, right?

let us know how your attempt with the cardboard box goes!