Cutting though the fog 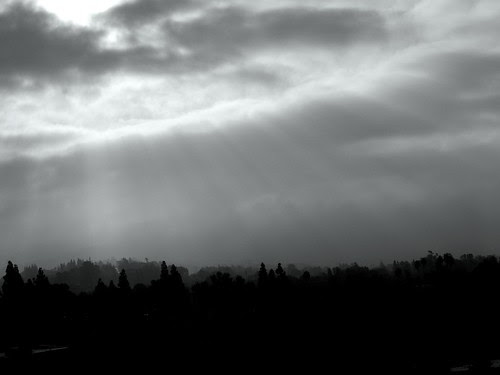 The new decade rolled in fairly typically around here. Winter fog is gracing our days right now, so everything is a flat grey at the moment. Honestly, I can't tell if there's a second sun in the sky yet, but I'll keep checking. Other than battling a head cold (a.k.a. brain fog) and readjusting to listening for the morning alarm clock, things are normal around here. Actually, that's a bit of a fib, as any working schmoe will tell you -- take two weeks off, and your return will be anything but truly "normal." I'm juggling a couple of things at work right now that conveniently went belly-up over the holidays (of course) but I expect to be back to my typecasting/photoblogging self soon. Reading around, it looks like not a few typospherians are in the same boat, trying to get back into that daily whatever-it-is-we-do-daily swing.

I have to confess to one thing, though: I did take a few opportunities to plunk out on the sofa next to the fire over break and actually start reading though the 2009 NaNo beast. At the risk of sounding smug or slightly high on cold medications (I'm both), the draft is not as terrible as I feared. Oh yes, there's a rewrite to be done, especially on the first day or two's output, where the details of the story were unclear and just dark shapes. I'm actually getting a little excited about this one, folks. I'll try not to go on about this any more, other than to say: if you happen to like hastily written, comic fantasy, I might want to snare you as a beta-reader.

Hope your New Year was a good one, and looking forward to reading and writing with you all once again in twenty-ten.

Edited to add: I should also mention that somewhere in late December I became completely addicted to last.fm, which is like audio crack for a music junkie like myself. (I need to have CDs playing pretty much non-stop while I work.) I've been enjoying stuffing my profile full of my broad/strange musical tastes, and it has not disappointed, even though it appears that artists and labels need to do the leg work on releasing their content. With the weather as blah as it is, listening to The Incredible Bongo Band play "In-A-Gadda-Da-Vida" is like sunshine piped straight into my brain via my ears.

Email ThisBlogThis!Share to TwitterShare to FacebookShare to Pinterest
File under: groggy, ujtu

Thanks for the last.fm link; through it I got to experience once again the greatest Christmas album of all time.

(3 Ships, by Jon Anderson, for those keeping score at home)

((Yeah, there are some clunkers on there, but Anderson more than makes up for it with a few original Christmas hits. I'm all shiverin' just thinking about it. There's goosebumps here.))

Umm DM I surely hope you are referring to Christmas with Chet Atkins, original version with the christmas tree on the cover, which is far and away the best Christmas album in existence.

I've become enamored of Leon Redbone's "Christmas Island" CD over the last few years. It's made great holiday lullaby music for all of my kids over the years, and I don't lunge for the "skip" button on any tracks, unlike other albums that haven't aged as well.

And I'm pretty sure Bing Crosby can mop the floor with both of your choices.

Whaddya know? There are at least two other people out there still listening to The Incredible Bongo Band.

And though I wasn't listening to that particular album yesterday, I was sort of startled to hit two very different songs in short succession that heavily sample In-A-Gadda-Da-Vida. One was from an Indian funk album called "Sitar Beat!"

I found T.I.B.B. courtesy of this mock trailer for "2012" and decided that I need this kind of soundtrack for my life. Every day would be like an episode of CHiPs with a little more bongo love.