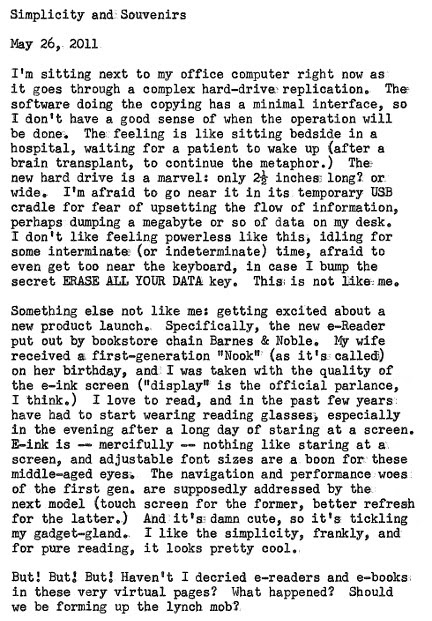 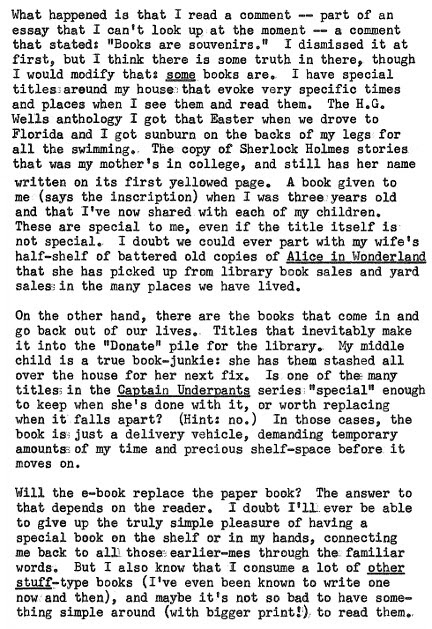 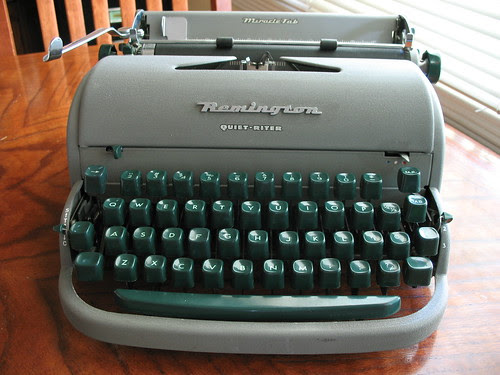 Email ThisBlogThis!Share to TwitterShare to FacebookShare to Pinterest
File under: anablog, moses, my this crow sure is tasty, quiet riter, remington, the future of reading, typecast

Also, Go for the book reader. Paper books are dead for general reading. I'd get one, but the convenience of reading on my phone outweighs buying another gadget.

Pull the trigger!!! Sorry...I like to be the evil voice in your ear.

I love my nook and use it often, but not always. I still buy physical books when I think it's something I'm going to want to refer to later or will particularly enjoy. Sometimes I've even been seen purchasing a paper copy of the book I bought on my nook to begin with, just because I liked it so much.

The allure of paper pages will never die - and that's how it should be.

I'm sorely tempted, though I have to wait about two weeks before they show up in the stores. My concerns thus far:

* Is navigation solely touch-screen only, or are those button-looking things on the sides actually buttons? Teh Interwebs is not helpful. B&N touts the new model as only one button, but I hope they didn't go full-out on that.

* Battery not user-replaceable. Can't decide if this is an issue or not. I may wait to see a teardown to see just what's happening inside. If the cover is two pieces, I don't see how they can truly prevent someone determined from getting inside.

* No browser on board, so no using public wifi hotspots (since you usually need to "agree" to use with a web page first.)

None of these are very strong concerns, IMHO. And I'd certainly like a carry-around-able version of certain electronic documents.

I feel cranky about the Nook and its ilk, but you do make some good points.

I heard recently that J.K. Rowling swears that the Harry Potter books will never be available for e-readers. She prefers to be responsible for the death of hundreds of forests ... but seriously, I tend to admire her stance. My daughter has read each of those volumes at least half a dozen times. They are self-sufficient worlds, independent of electricity, hardware, and software -- except our own brains. And there is something beautiful about that.

As for Capt. Underpants -- point conceded!

I like the "books are souvenirs" idea, since I rely so heavily on the library and could not possibly have kept a copy of everything I've read. I usually buy books used when they are unusual or, when new, directly from the author. I'll probably go with the e-reader favored by my libraries, if I don't just stick with my netbook.

@Richard: I've been cranky, too, but eyeballing the display on these things really is like Finding Religion. Admittedly, it's workings are all a little sci-fi, but it is truly easy-on-the (weak) eyes.

Good old J.K.. We proudly sport a shelf in the house with all seven volumes of Mater Potter's adventures. Those are special, too, and when we loaned out book one to a friend who then moved (!) I was dispatched forthwith to get a replacement hardback so we could be completists.

My points of contention are falling, by the way. Official word is that the new one will allow public wi-fi access for those points that require some kind of minimal acceptance. No full-blown browser, but I don't think you'd want to web-surf on one of these anyway.

That leaves the side-button issue, which seems to be a non-issue (everyone assumes they are there?) and the battery-replacement thing. Resistance is futile.

That would be "MaSter Potter's adventures." Mater Potter is a different story entirely.

I've thought of getting one of these e-book dealybobs (I already read business type books on my phone only, but I hear you on the eyestrain), but ironically I am starting to become adverse to gadget junk. Every year there's a new phone, ipod, camera lying around, prematurely worn out, dropped in the toilet (hello husband and my Windows 7 phone) or the new and better thing that comes along, and unlike books they aren't charming piled up on a shelf, and they have no resale value for anyone else. So I think, perhaps, I'll be seated next to Richard in the cranky section on this idea, even though I'll probably end up with one at some point.

@Strikethru: Your beloved phone! I won't ask what it was doing in the bathroom...

I should take a picture of my "new" phone, the one I got in December. The one I dropped five months later.

There's a delicious spider-web crack that's now spread across the face of the phone, and my homebrew solution -- a big piece of clear packing tape
-- to keep it from fragmenting in my pocket and nicking a major artery. "Programmer Bleeds Out Thanks to Redneck Phone Fix." I can't bring myself to buy a smartphone, because... why? I just want a phone. Not a browser/camera/calendar/AngryBird/thingus. And I'm mad at myself for being a klutz, and punishing myself by not replacing the phone right away.

Regarding the e-reader, I feel completely disingenuous after ranting and raving about the impermanence of electronics and the rat-race of upgrade cycles and forced obsolescence, and then going all starry-eyed over the silly thing. But I also have to admit that checking out five or six books at the library (I like to read) and then trying to keep them perched on my bedside table/typewriter stand (yes), and then wanting to read them when I'm somewhere not-at-home...

There's a reason iPods sold so well: you could bring your music library with you, and the device was built to maximize the experience with minimal interface woes. For a book-junkie, this looks like the iPod of reading, with the added bonus of being compatible with my library's growing eBook selection.

I've had a Kindle for a couple of years now, so I will start off by saying I'm already converted to the dark side. I like my Kindle well enough, although I will concede that there is a lovely thrill that comes from finding a much-sought after book in a pile of used books selling for cheap.

That said. I thought of this post today when I was out at a neighborhood garage sale and we spotted a Lettera 32. There was much excitement and rejoicing, it was only $8, and I was tempted. But then I walked a few feet, and what did I find but a brand new, shrink-wrapped, Nook Color - asking price 10x the Lettera, but still a good discount from the original purchase price. (My husband is skeptical, he thinks it "fell off a truck".)

Long story short - guess which one I'm fiddling with now. Let's just say I could have posted this comment with it...