Weeding Wednesday, and the Battle of the Bloat 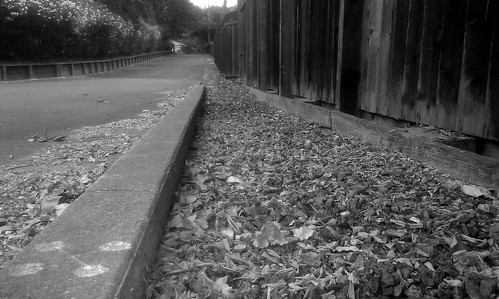 The task at hand

This morning I made a start on one of our summer obligations: working service hours at our local swimming pool, as per our membership terms.[1] Ten hours in total of some upkeep-related activity is required, and we habitually choose the weeding/sweeping of the parking lot. Done in the early morning, it's cool and vacant, and given our normally dry summers[2], once weeded, it tends to stay weeded for the duration of our duties, only needing the weekly sweep to keep it looking nice. Little maintenance is required if you do a good job up front.

My entertainment -- and the above photo -- is provided in the form of a hand-me-down smartphone from a relative that was mouldering in a drawer (the phone, not the relative) after being outclassed and out-spec'ed by the relentless advance of its successors, marching to the beat of Moore's Law. As urged by several articles on the Internet, and after being assured at how easy it would be by following the step-by-step instructions, I did what any sensible person of my technical background would do: wasted a lunch break or two trying to unlock it, then surrendered and handed it to my teenager, invoking the ancient ritual of "Root the damn thing for your incompetent father and I'll take you out for burgers." A day later, he dropped it off in my hands with the appropriate response ("Double-Double with an extra large vanilla shake and fries") and lo, it was good. Evidently, so was the burger, shake, and fries.

I've recently been in the phone market, since my current one is now at death's door, and, as the Son gleefully points out, "It's so old the keypad is in Roman numerals." Smart-assery aside, he's right. And thanks to a good decision by the federal government, the market for phones is as broad as the Internet itself. After researching and comparing, I've bought a phone online (Arabic numerals) and picked a carrier, and am getting hooked up. I'll miss my old phone somewhat, as it's dead-simple and survived much neglect at my meaty hands, not the least of which is frequent drops (the new phone is also rugged.)

Alas, in this enlightened iEra of iSmart iPhones, even a "feature phone" as mine is classed is not free of that most dreaded of infections, bloatware, aka, crapware or (politely) handy software add-ons from your truster carrier. Thanks to the "unlock law" cited above, the vendor for my phone is actually not my carrier, so not only am I stuck with applications that I don't want, but they are applications I can't use, since they are tethered to a service I don't have.

Yellow Pages, I explained, and then I had to explain the notion of a phone book[4].

"Well, can I root this for you?" he asked, angling for another free meal.

"I don't think so," says I. "It's not Android. It's a proprietary closed OS. It's not like there's factory images out there." This is me, trying to salvage my own failure with the music player setup by recycling some jargon I read. It sounded good.

The Son handed back the phone and unconsciously wiped his fingers on his shirt, like they were soiled. Pah.

What's worst, of course, is that he's right. Bloatware really is a nuisance, taking up limited memory on an already low-power device, and I bought the damn thing. Thanks to the FCC, I even was able to snip the software tether that tied it to the old carrier. But the traces remain. Unlike the logo on the faceplate, there's no easy way to pluck out all the weedy code that's infesting my new device. Given my fruitless experiments with the supposedly open Android system. I know that if I suddenly lost my senses and wanted to blow a mortgage payment on a carrier-subsidized phone, it, too, would be saturated with useless and immortal apps and "features," testaments to a business partnership that may not have any relevance to the customer.

I know this is my usual sour-graping. I basically got the new phone for free, by converting piles of loose change from my drawers into online store credit. I'm only one phone-technology generation behind the curve, and because of my inherent cheapness and utter lack-of-being-a-teenage-boy-ness, I am squarely in the boring demographic of phone plans.[5] And this whole discussion is so #firstworldproblem that in the grand scheme, it makes little difference.

But dammit, I want my space looking nice.[6] I want to weed this silly thing down. Every time I have to jog past some useless icon -- looking at you, "YP" -- it's an automatic reminder of the automatic obsolescence that surrounds us, and the silent pressure that we're all faced with to stay ahead of that march. Eventually the teenagers will grow up and move out and buy their own burgers, and then where will we be?


[1] Unlike the pools of my youth, which were public, this part of California at least is very big on members-only neighborhood pools, usually the nexus of the other local phenomenon of neighborhood swim teams. "Our" pool is mercifully swim-team-free, which is why this dramatic low-angle photo of the parking lot shows no cars. Swim team practice usually starts at Ungodly O'Clock in the morning. This would have been packed if we had a team based at our pool.

[2] Except this morning, when it was -- and is still -- lightly raining. This is cause for celebration in our drought-stricken state, and especially coming a few days after a patch of baking heat. I have learned to appreciate water like no other resource since becoming an adopted Californian. [3]

[3] Can you tell I've been reading David Foster Wallace lately, he of the meandering footnote?

[4] And then a digression on public pay phones, and how it was amazing to me the first time I saw a major metro-area pay phone with a massive book suspended from a don't-steal-me chain, between those thick black plastic covers. The "Appliances" section alone was easily larger than the entire directory of my hometown. The Son tuned out about 3 seconds into this digression, as I'm sure you have.

[5] You know it's bad when the salespersons look at your current phone, shudder visibly, and then point you towards the Carrier Aimed at Seniors, with Very Basic Phones containing No Sharp Edges and having Large Easy-Read Buttons on them. And you know, I really did consider it.

[6] "My" meaning "really I'm licensed to use this device and theoretically don't own it, due to some Byzantine click-through contract, oh and by the way, the carrier now owns my teenage son in perpetuity under the terms of the Family Plan." They're welcome to him, I say. He's expensive to feed, and awfully smug.

Email ThisBlogThis!Share to TwitterShare to FacebookShare to Pinterest
File under: behind the times again, cranky pants, fatherhood, ranting, technogrief

This was very amusing to read. And I, being a DFW fan, also enjoyed the footnotes, but would've expected one of them to go into the details of the various phone operating systems, as in The Pale King or Infinite Jest.