Today was a difficult day: my lunch was interrupted by a minor crisis, and while fixing that, was interrupted by another more major crisis, the two of which conspired to keep me away from my afternoon NaNoWriMo session. I'd been especially looking forward to this one, as I'd literally been on my feet all day -- I'm using a new standing desk, and am in the adjustment period where my back is happy but my feet are protesting. Sitting in a padded chair for forty-five minutes in the middle of the day sounded pretty damn good. But instead what I got was a gulped-down lunch and two hours mired in the depths of financial software. By the time the fog lifted, it was too late to skulk away with the Skyriter under the arm.

This made me bitter.

And then the lights went out.

For the second time in a month, we lost power to our building, and after the wails of despair died down ("I didn't save!") and casual conversation broke out in the hall, I realized that life had turned my lemony day into novel-ade. Out came the typing pad and the Skyriter, and for the next forty-five minutes or so, I typed by the fading daylight, boosting up the word count. Someone even stopped by and jokingly suggested that I hand out spare machines to anyone needing to finish up their work. I said, "I am doing work!"

This made me smug. 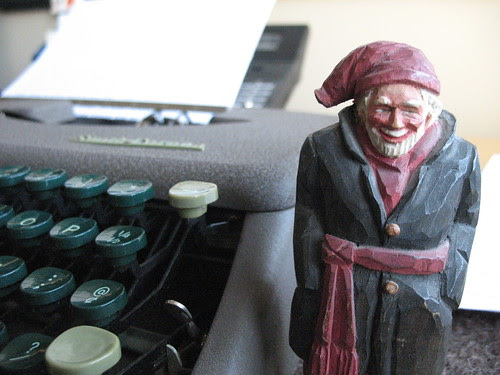 I took the sudden work stoppage as a sign that Dramatic Action was called for in the novel, too. I've been languishing a bit, wallowing in the flabby and ill-defined section in the middle of my outline. When the lights went out in the office, though, the lights came on in my brain, and whether it was the unexpected opportunity of a writing session, or the endorphin rush from finally sitting down, I think I've got a title for the story, and even a decent synopsis I can put up on the site.

Email ThisBlogThis!Share to TwitterShare to FacebookShare to Pinterest
File under: blogging in the dark, flickr view whoring, inspiration, nanowrimo, skyriter