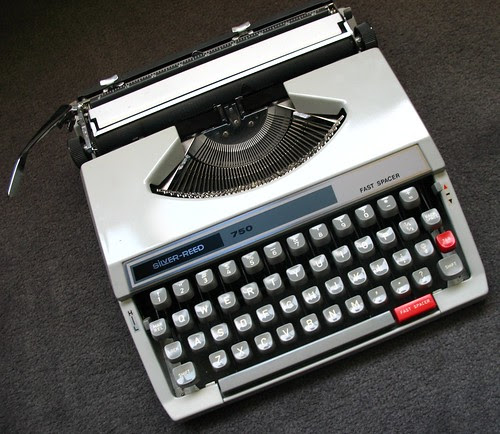 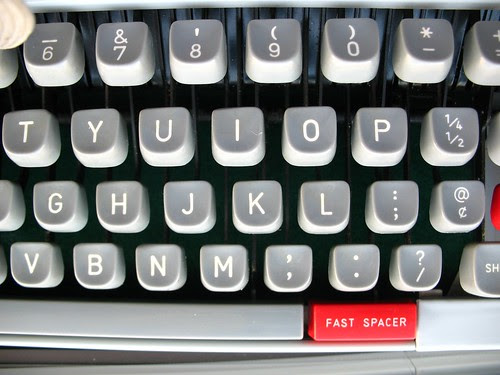 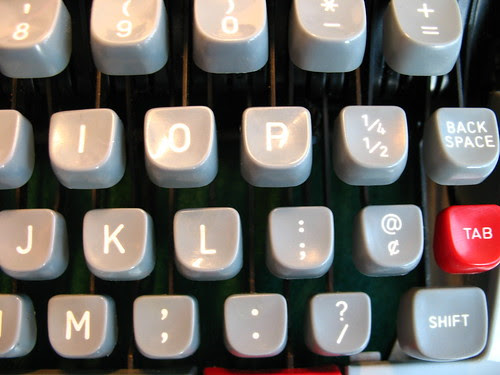 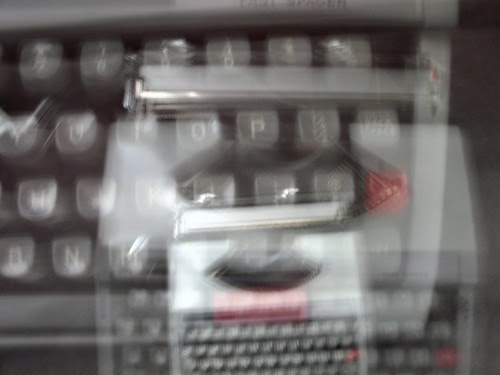 
* It's nothing like felt at all, however, being made of recycled soda bottles. It's fairly stiff, and comes in a sheet large enough to cover the entire bottom of the machine with slight trimming. Those of you of the feminine persuasion would be wise to note that it also comes in a variety of patterns and prints, which would look pretty outstanding under the keys of the right machine. I've used regular "craft felt" for another typewriter re-lining project, and the improvement in looks is significant, and at least all my fumbling around didn't make it louder. The recycled stuff is a little easier to work with, though: it cuts a cleaner edge, and is rigid enough not to flop around as you're trying to stick it down. And this footnote has gone on way too long, which is another sign I need a break. I ramble.

Have a nice blog-cation, may it recharge your soul. (:

You can also get ready-to-stick felt in craft stores. It comes in 8.5x11 sheets with waxy paper backing that you peel off.

1) This blog-cation thing is upsetting; very much like getting the dreaded email from IT saying they're in a meeting for the next two hours and can't be reached. I generally just sit very very still during such intervals, afraid to even move the mouse. I picture the blue screen of death and my eye starts to twitch.

2) This lining-with-felt would be the perfect complement to a paint job, I would think. Maybe that Underwood 18 I'm attempting to Silver-Surferize would be a good candidate. What kind of felt would you recommend to disguise the occasional dropped nacho crumb?

Blog-cation? I need a inter-cation. The internet has reclaimed my soul, and I'm ready to fight back for it. And with all my blogging friends slowly dissappearing, a week would probably do me some good.

But it's not going to happen. You have fun though!

Happy blog-cation! I just had one myself, and if I had announced it on the blog beforehand, perhaps I would have enjoyed it more and felt less guilt the entire time, haha. I think the late Easter break this year has everyone antsy; I know I can't wait to take some days off work and just be.