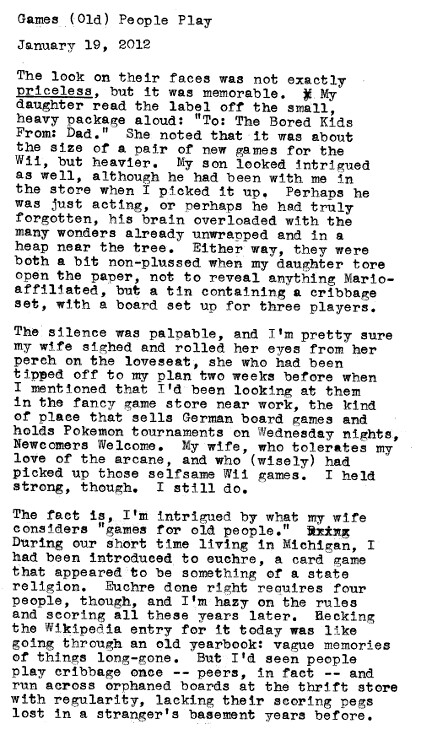 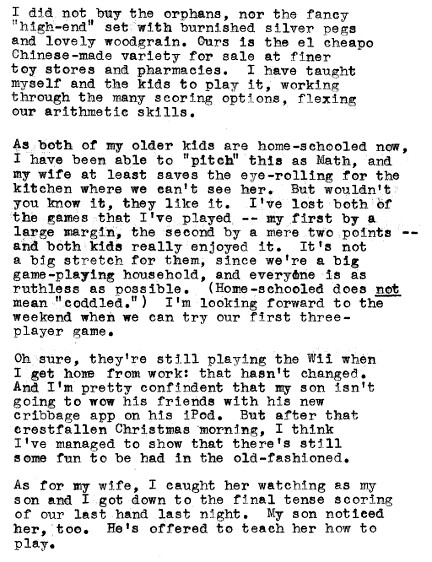 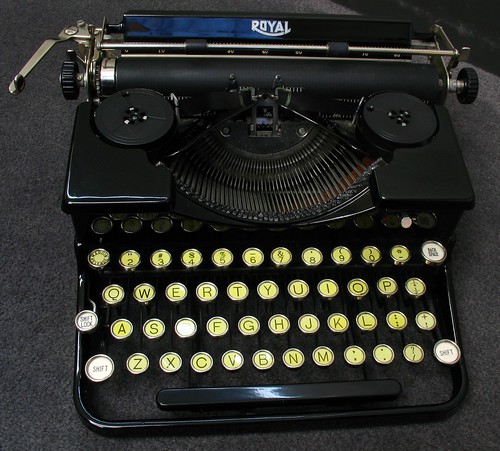 Beautiful typewriter! I also have fond memories of playing euchre and even board games. I still enjoy them as do our children (youngest is 33). To me the old board and card games are just more fun.

Cool. Who knows, maybe cribbage will become the great new retro fad of this decade?

That looks just like the typewriter I was using in the airport when a teenage girl called it "so COOL!"

It's always surprising when young folks so take to games that are too "old" for them. We here at Chez Speegle have been playing "8 & up" Catan with Jack, who is five, and he manages to hold his own with a frustratingly preternatural ability to roll sheep and wheat. The little monster.

And I won't even get started on Pokemon. If I never see another Tepig again it'll be too soon.

i've long wanted to try both of those as well as bridge. can't find anyone to ply with. the radio club had a cribbage group when i first joined but they met on wok nights and have since stopped.

Strange that the African games of mancala and backgammon have been popular with my (now) thirteen year-old for a good few years now.

Euchre is an Indiana state religion as well. We play a lot with my in-laws, but often with six players, bid Euchre or double-deck bid Euchre. Its certainly one of my favorite card games.

We've got a closet full of board games, but so far the kids are only old enough to start playing things like Chutes & Ladders, Candyland, Memory and some TV branded games where counting or identifying colors or shapes is relevant.

But, when they get older, we have plenty more games, both of the American and German variety. And I'm still a proponent of table-top roleplaying games.

At four and three, a board game with Dad still draws more attention than the Wii, DS or Smartphone...well, unless they are watching me play Mario Galaxy:)

Sounds like a lot of fun to me! I love game nights. I don't have any kids but my family indulges me during their Thanksgiving visits.

Mike, do you know the exact manufacture date of your Royal "O"? It looks like a slightly earlier style than mine, made in Nov. 1935.

Cameron, I *think* it's from 1932, but that's based on tw-db.com, which is sometimes off the mark. "Early 1930s" is good enough for me, usually. It's the oldest one I have in typing shape (and one of the prettiest, too.)