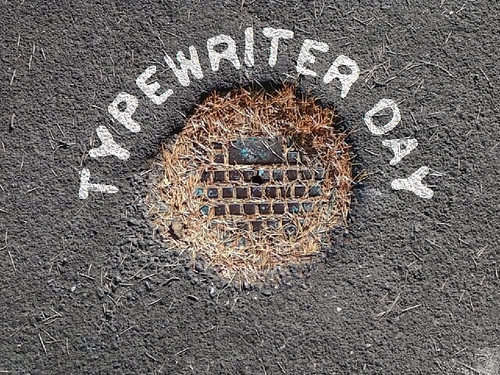 It's Typewriter Day today, the anniversary of the first U.S. Patent by Christopher Latham Sholes, and a good enough reason as any to celebrate the establishment of the machine that transformed writing, business, and the lives of thousands (millions?) over many decades.

Today is also, I later learned, what would have been Alan Turing's 100th birthday. It's just as arguable that Turing's work also transformed writing, business, and the lives of millions.

Though neither man can get sole credit for the invention (and later perfection) of their creations, both stand out in their respective fields, and you wouldn't be reading this -- nor I writing it -- without their work. I'd like to think that both would have appreciated the natural contrariness and DIY-ish-ness of the Typosphere, too.

I started today off on a decidedly curmudgeonly tear, ripping down advertising that appeared to have magically affixed itself to the street light poles in my immediate neighborhood. I consider this sort of thing vertical litter, and feel that I have just as much right to remove ads stuck to a public pole as the originator had to post them. (More, in fact, since I'm sure they are violating codes.) After stuffing the accumulated paper into a nearby garbage can, I happened to look down and notice how much the metal covers on our local residential water lines look like a certain Sholesian invention.

In honor of both these gentlemen, today I will be typing something and it will be cryptic. I'll say no more right now...

Have a grand day, everyone! Don't forget to share the outcome of your own celebrations over at the Typosphere.

The Turing connection is serendipitous!

I'm intrigued by the cryptic typing project. Keep us posted.

Hey, I would have completely forgot about Alan Turing if you did not mention him!

Happy T-Day, Mike!
Thanks for your effort to keep it alive. Much appreciated.

You have me on the edge of my seat with this cryptic typing. What could it be?
I have never once seen anyone removing those sorts of ads from lamp posts. I don't live in anything of a city, but work occasionally in Philly, and they really are everywhere. The most we get around here are the stickers of various bands plastered on road signs at busy intersections. I wouldn't check out their music just because of this, so thank you for taking a stand.

For some unknown reason, my personal calendar has 6/23 as the birth date of Johanne Gutenberg. Not sure where this came from (which is odd, since I created the calendar myself...) but I see from lots of reliable sources (and from wikipedia) that his exact date of birth is unknown. But, still, it COULD have been 6/23.
Coincidence? Maybe.