I finally managed to get a replacement bolt in place to secure the carriage return lever. Just to recap, here's what the business end of the carriage looked like "before," after I'd carelessly sheared the bolt in two while trying to tighten the mechanism down. 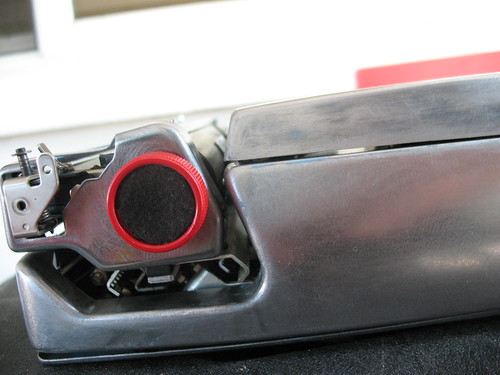 And here's the replacement bolt in place, approximately the same length, and mercifully, the same threading as the bolt it replaced. So now all I need to do is put the lever on and tighten (carefully!) the nuts that hold it in place, right? 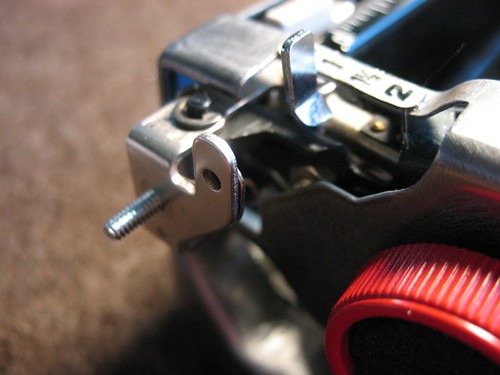 Well, no. When I fasten the lever in place, it doesn't stay put. Since this is a travel machine, the return lever folds down for transport, and then snaps upright for use. But the "snaps upright" part isn't happening. If your name happens to rhyme with "Pitchard Bolt" then you surely have seen it already...

That little hole you can see there, in that angled bit of metal? Yeah, that? That is supposed to hold a teeny-tiny little ball bearing, which presses against the return arm and provides enough friction to keep it in the stowed position. The return arm has a smaller hole through it which the ball bearing pops into and acts as a lock. It's a really clever system, and obviously far more clever than I am, he who blinding removed the arm without paying attention to tiny round Important Parts that likely went pinging around the room someplace.

So, I'm off to see if I can source a tiny, tiny ball bearing. Small enough to fit into this hole, but not so small that it passes through the return lever's hole. That's the bad news.

The good news is: I wouldn't have been able to puzzle any of this out without a working example of the same mechanism to compare. (Installing the bolt meant removing the whole piece, including a spring under tension.) But I won't tip my hand about that quite yet.

There was some discussion in the comments about how tiny the "tiny, tiny ball bearing" actually is. Based on some shaky camera work, I'd guess it's a 2mm size, or pretty close to it. I'm going to see if the craft store has any metal beads that might fit the bill. 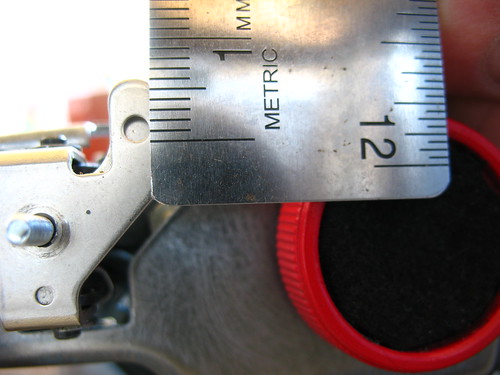 Email ThisBlogThis!Share to TwitterShare to FacebookShare to Pinterest
File under: 100, kmart, one step at a time, silver surfer, too many trips to the hardware store

Now I know what I can do with the tiny ball bearings I always toss in the trash at work when I replace bearings that die on machinery.

Oh jeez, what a pain. No, I didn't know about this at all.

I agree with Bill, the red knob just looks fabulous with the shiny metal.

This will look so amazing once it is done. The knob looks awesome, and I really wish I had some ball bearings I could send you. A few came with bunch of Underwood Standard parts I bought, but exploded when I opened the package...

When we say... teeny tiny... are we talking ball-point pen ball size?

I think you might be able to cannibalize this out of something quite readily. Otherwise your local bearing shop will be the place to be.

I reckon you spent 20 minutes looking around the location you dismantled this, before your eyes started to hurt.

It is looking devilishly sleek - especially the red knobs. 2mm is pretty small for a bb but a bike shop may be able to help. Loose-bearing bike pedals use a pretty small size ball. Or possibly the inside of an old freewheel assembly?