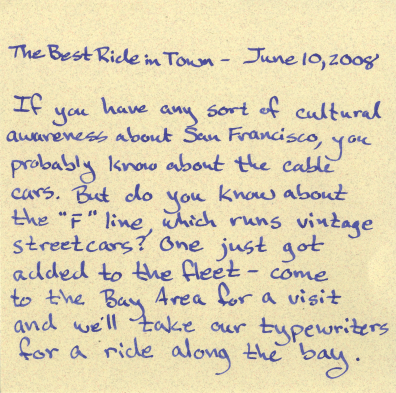 You know Duffy Moon's typewriters would go for this idea. ;-)

Shoot, if I weren't a complete homebody (I've been west of the Mississippi once, but only so far west as to still be able to actually make visual contact with the Mississippi, for orientation and return-home vectors) I'd be there in a heartbeat, Remington and Olympia in tow.

Oh! I forgot that Duffy's typers are real swingers.

The F line doesn't go through the more colorful parts of the city, but it's still a great ride.

I've yet to use one of my typers in public. I'm a conundrum - I *want* to be a counter-cultural retrogrouch, but if I behaved like one, someone might actually look at me. Eek!

Out of curiosity, what pen and ink did you use for this post?

Elizabeth, aren't you joining us for Typewriter Day? All the cool bloggers are doing it (and me, too.) Public typing isn't so bad, really.

That hasty scrawl called my handwriting was done with a cheapo Sheaffer F nib calligraphy pen, using a Sheaffer blue cartridge. Paper is a square of Southworth 32# "Executive Fine Granite Note Paper." I cleaned out Staples of these when they were on clearance for $0.25 each for a box of 250 sheets. I have something like 6 1/2 boxes of the stuff now.

Neat! I made sure to ride a totally unnecessary loop on the F line last time I was in town. No typewriters in tow that trip, but snapping away with my Argus Super-75. So I did do a little retro on the retro-metro.

I had not seen that photostream, although for a few lucky years I got to work right in SF and take regular walks down Market and towards the Embarcadero where these beauties run. The transit system is oft-cursed, but these are truly a classy ride. When I get to play tour guide for visiting friends, I make sure that we catch a ride on one of these.

I hadn't officially signed up for Typewriter Day, but maybe I should...if I'm not too late!

I'm thinking sitting out on my front steps where the neighbors can see me might be as public as I get, though. ;-) We'll see. I've been waiting for the weather to warm up and dry out so I could *maybe* bring a typer with me to the coffee house where I like to stop on Saturday mornings. I don't think I'd dare bring one (and the accompanying noise) inside, but I think I could work up to using out at one of the outdoor tables. Kinda like that idea.

Elizabeth, you're not too late. Shoot an email to me at traveling (dot) type (at) gmail (dot) com with your general location and I'll sign you up.

Typing on the porch is plenty public. The tap-tap-tap as it rattles around the neighborhood should jog a few memories, and that's what this is all about.