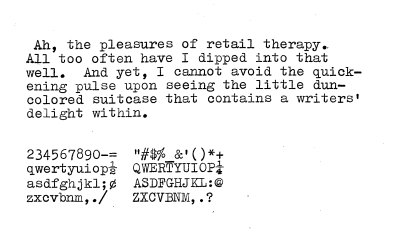 As I bent down to drop off the box of clothes, I caught the unmistakeable shape of a typewriter case. A quick peek, and off to the registers, tally ho! Inside:
Initial impressions:
UPDATE: Zsa Zsa's first portrait.

This never happens to me, at least no with an Olivetti. I'm beginning to think they just weren't sold down here in the south.

I'd trade some of that luck to be located close to a shop like Acme, though. The typewriter place in Berkeley -- though highly recommended -- keeps very limited hours and charges about $75 just for a cleaning. I feel like I'm not doing some of these machines justice with my clumsy fumbling.

I could have three typewriters cleaned, repaired, and wound with fresh ribbon for that.

I'd love to have a Studio 44, though. They're gorgeous and i understand they type like a dream.

I should say that they /start/ at $75. Acme-style servicing has been quoted to me at $100. Seriously.

And so, I dabble at cleaning and minor repairs.

Yes, it costs me over $100 at my typewriter shop here in Washington, and no ribbon included. Thus, my beautiful Quiet De Luxe still sits dusty and clogged with eraser shavings.

Strikethru, if the Quiet De Luxe has a bottom on it, just unscrewing it should let fly many years' worth of eraser bits from the innards. With the bottom off, a can of compressed air, or a hair dryer on a "cool" setting should work to get the other loose gunk out.

I plan to de-bottom the Studio 44 soon, and expect a lot to fall out of there. Following up with a little brushing with some clean artists' brushes, and lubricating the key pieces with this:
http://www.dritz.com/brands/showcase/details.php?ITEM_NUM=904

I would love to have the machines professionally serviced, but since I keep picking up MORE (sigh) that particular budget item is out of reach.