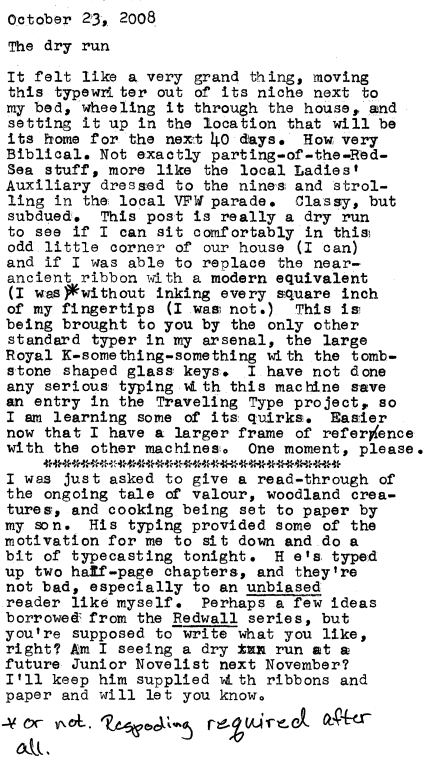 The Royal when it was situated elsewhere:

Email ThisBlogThis!Share to TwitterShare to FacebookShare to Pinterest
File under: anablog, creativity, fatherhood, i have a black thumb in typewriter-fu, typecast

Sitting comfortably is half the battle. Our cheap plastic desk chair is almost cracked in half so I'll probably be on the couch a lot.

I'm glad your son is keeping on with his story!

And, mp, hurrah for any son of yours who spells 'valour' with a u. If only more Americans saw the beauty of British English...

(Yes, I acknowledge the battle has been lost: shops in Britain are already stores; they sell cookies not biscuits; trick or treat, unheard of in Britain ten years ago, is around the corner; and this weekend there's even a regular-season NFL game in London. What are we coming to?)

On a re-read I would have been better to substitute "gore" for "valo(u)r." Typical ten-year-old stuff, I think. I hope, anyhow. The best part of this night was him lugging his typewriter out to the family room and asking me "dad, are you going to be typing tonight?" I really do love it.

As for the Brit spelling, you can tell that I watch too much BBC America (with the subtitles on, and Google nearby so I can look up the references.)

Looks like good, clear type! That's one thing I like about my standards...the print comes out so beautifully even.

I'm still planning to mix hand-writing with typing this year, most likely switching back and forth when I feel stuck. It works for me.

As to American and British spelling...I mostly spell American, but I tend to get annoyed with some of the on-line word games I like to play because they don't let me use words like "dreamt" or "burnt", among other words. And Microsoft Word gets peeved with me if I use my usual spelling for grey. It isn't fair.