I hope you know what you're doing 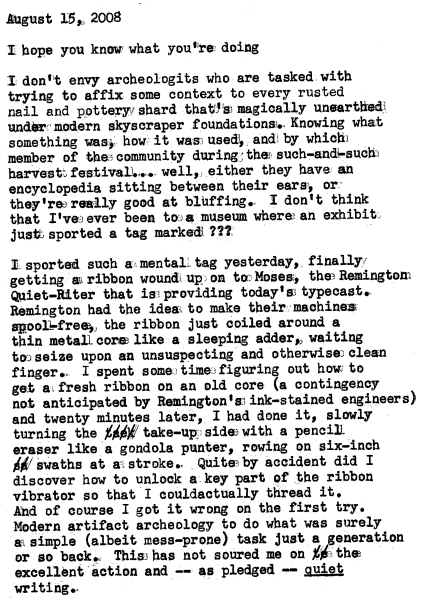 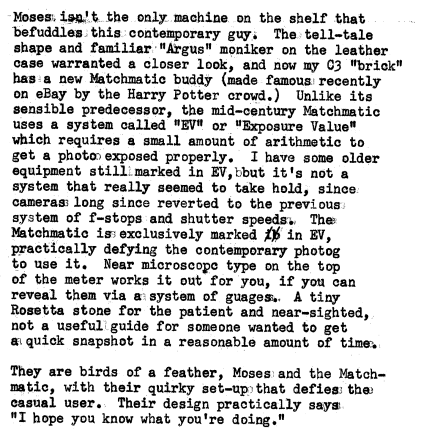 Email ThisBlogThis!Share to TwitterShare to FacebookShare to Pinterest
File under: anablog, argus c3, matchmatic, moses, my what tiny numbers you have my dear, quiet riter, remington, typecast, typewriter

I went through a similar inky process with my Remington Standard and Remington Noiseless. Plus, like an idiot I used one of those cheap ribbons made for adding machines or some such, and which have WAY too much ink. That stuff is hard to get off.

I used one of those on Norma Jean, the lure of two-color typing being too great to pass up. I should have passed, as it's like typing into an towel.

Since then, I've put together a ragtag batch of tools for ribbon changing -- paper clips bent into various hook shapes, a sacrificial pencil for turning spools. I can see why cartridge ribbons were embraced by manufactures.

Mithrandir, my Remington Monarch, gave me fits too when I tried to put a Royal correcting ribbon on him. The ribbon box said I could push the core out of the spool with a pencil. Yeah right. I ended up unwinding the whole thing off the spool and then winding it onto the machine.

They lie. I rolled the spool by hand. The core has a little triangular prong on it that attaches to the ribbon: a mere pencil-push won't budge it.

Not to use you like my own personal walking talking instruction manual or anything, but I don't suppose you have any earthly idea how to use the "Miracle Tabs" on the Quiet-Riter? I just bought one on eBay, and am at a loss.

I think the only "miracle" is that they're set from the keyboard, instead of via a sliding thingus on the back (technical term) or a removable bit of metal.

Usually, the procedure is: move carriage to the proper location, hold the lever to the "S" position (Set) and release. Do this for as many tab stops as you want to set. The "C" will clear an existing tab, if the carriage is sitting at one. You should be able to feel a little click when you set a tab, as it's moving a small bit of metal -- the tab stop -- in place. Clear just moves it back.

I have little luck with tabs, though. There's a push-and-hold move necessary to move the carriage to the next stop, and I always seem to sling past 'em.

I...see? Guess I'll have to give it a whack a little later. Thanks!

It's easier than I've made it sound. Tab setting is pretty much the same as every other keyboard controls I have: some have a dedicated key for the set and clear, the Quiet-Riter just does this with a lever.

A-ha! I finally figured it out. Thanks again! -M