Terror from the skies 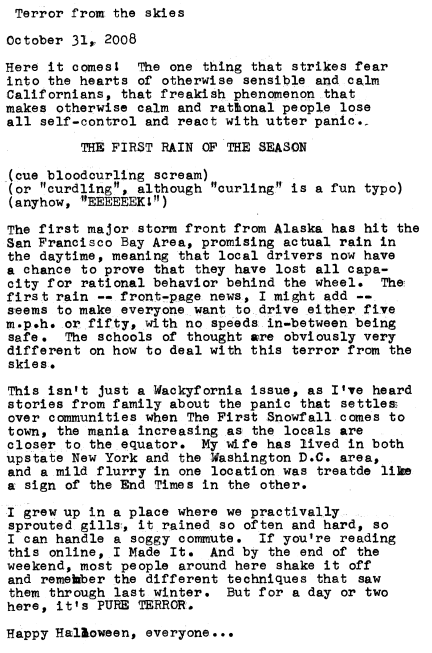 Email ThisBlogThis!Share to TwitterShare to FacebookShare to Pinterest
File under: anablog, royal, typecast, your morning commute of doom

When I read the title of your post, I thought you were going to be writing about the Zeppelin that arrived in Sunnyvale last week. But this is even more blood-curling! Blood-curing? Blood-cuing? No, that's tonight.

You have my empathy! I used to live in a suburb of Washington. DC. Every year, people around there reacted to the season's first snow in one of two ways:

2) "Ye gods, these people are all driving like morons. I'd better speed up and switch lanes a lot."

Put 1) and 2) on the Beltway and watch the hilarity ensue.

Like you said, eventually people reach deep into their subconscious to rekindle the long-dormant instincts that their ancient ancestors relied on last year, and all is well. For a season...

You know, whenever it rains here in Seattle (!) there are massive traffic jams at rush hour, and everyone drives like idiots. Right, you'd think that we'd be used to rain.

The furthest south I've lived is just below the 43rd parallel. We take great bemusement in watching entire metropolises (metropolii?) grind to a halt beneath a dusting of snow. On the other hand, our own drivers all seem to shift to the extreme of becoming complete maniacs on the road. But that's pretty much all the time, not just when it snows.

We had our first snow of the season on Monday, incidentally. Rather late in the season, if you ask me. Somehow it's just not Halloween without a good blizzard to trudge door-to-door through.

I happened to be visiting my wife's family over Christmas during a major winter storm, which dumped feet on snow on everything. The National Guard came out with end-loaders and dumped all the excess into the river -- problem solved! THAT's how to handle extreme weather, Buffalo-style.