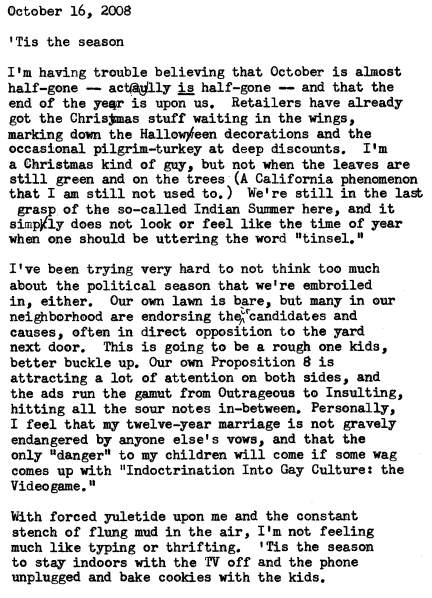 I agree wholeheartedly. Election years are depressing, a garish display of all that is wrong with how we act towards each other. What makes it a super-drag is that Fall/Winter is such a great time, and it's hard to enjoy turning leaves, pumpkin pie, and our various religious celebrations with so much bitterness in the air.

Like a good voting 'merican, I Blame The Media.

Actually, I really do. There's no reason we need to have holiday stuff shoved on us this early, except maybe to help stores recoup the $700 zillion earmarked for bankers who appear to be bad with money and prone to take risks on the credit-clueless. It's a little hard to reconcile walking through the store with glowing plastic witches cackling in aisle 4, locked in a musical battle with dancing reindeer in aisle 5.

Without TV and radio blaring obnoxious campaign smears at me, the election season would seem quite reasonable. I do pity those of you living in so-called "battleground" states. You should put in for post-traumatic aid come November 5th.

I live in The Land of Huckabee. Don't get me started.

Once Halloween is safely tucked away, we're on a forced march of giant inflatable snow globes and musical plastic trees at ever turn.