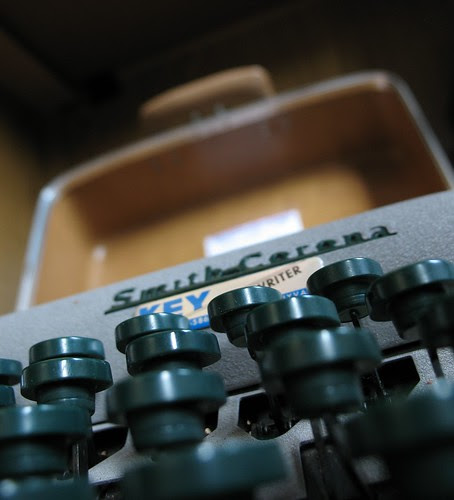 Sometimes sense and reason win out, and sometimes they don't, what can I say?

Email ThisBlogThis!Share to TwitterShare to FacebookShare to Pinterest
File under: stop me before i thrift again

Oh, dear. You're turning into me. You do realize that, don't you?

There oughtta be a support group for people like you.

What? No, I'm not like that. I haven't even looked at another typewriter lately.

Now these, on the other hand...

Me, I will likely be journeying to look at a certain hulking mint green typewriter tomorrow. So I can't criticize in any way. Glass houses and all that.

Speegle, you're waiting for...what? I mean...it's *orange*. What else could one ask for?

@Olivander: I'm not too worried, you've got a sizable head start. BUt I certainly feel like I'm in the same mindset, which is drastically dangerous.

@Speegle: That's all purty and all, but what I'm really after is one of these beauties by Pilot/Namiki. Yes, that's a retractable fountain pen ("vanishing point") in don't-steal-me yellow.

@LFP: The same old story -- lunch break, thrift store, familiar-looking case with a criminally low price, sitting in the corner tucked in with some electrics and a modern plasticy manual. This one seems really clean (except for eraser dust) thanks to evidence that it's actually been serviced at least once in its life (note the blue badge in the photo, and the blurry business card inside the case in the background.)

Of course, I already have a 1950's Sterling, from Olivander, in fact, but this one is different because it's from later (says Ego.)

The whole Id/Ego thing makes me think of a classic film moment in The Emperor's New Groove when Kronk has the conversation with his Shoulder Angel.

Kronk is one of the finest characters in cinema ever.

More pics needed so that we may accurately judge you.

I think it's just good Morality Management to keep Id sated with the relatively harmless things. It's the only thing that keeps me off heroin and drinking bosco straight.

@Duffy: Just a standard old Smith-Corona Sterling, pretty much twin to the one that I already have, but in my defense, I blanked out in the store (happens a lot) and thought that I had a Silent. C'est la vie.