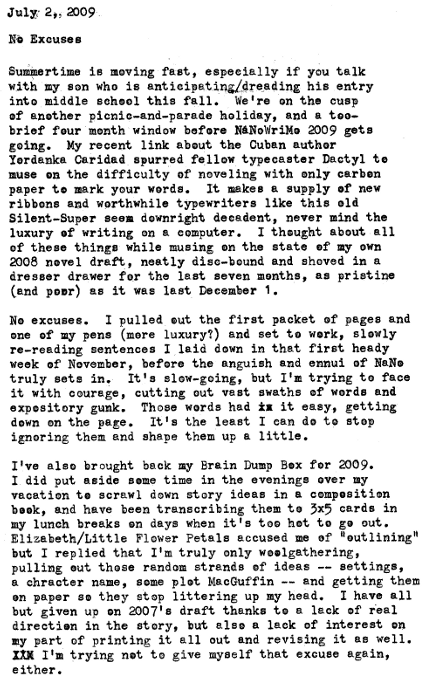 Typed on my cleaned-up 1957 Silent-Super 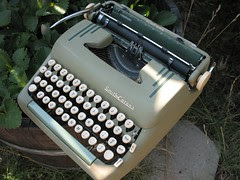 Bitter jealousy at the fact that you actually finished your novel. Mine creeps slowly towards completion.

Been working on a rewrite of mine since January, with my writer's group. Nice bunch of gals (I'm the only male in the group) and it's been really helpful. Painful at first, but really not so bad.

The re-write, however, continues to be more painful every day.

But, you know, don't let that dissuade you.

On that notre, Duffy, I find that most IRL novelists are female. During NaNo, there was a very small revolving cast of one or two guys among a fairly large group of gals. And yet, here on the Tubes, the XY's outnumber the XX's, or at least as near as I can tell.

I can't even think about NaNo until this rewrite is done. I've got a writing group going willy-nilly at mine, too. It keeps me on track.

My first rewrite deadline is the end of September. After that, I'm free to go crazy on the next NaNo. It's like knitting a sweater - can't buy any new yarn until this one is finished.

Wait...you're not supposed to buy new yarn until a project is finished? Uh oh.

@Dactyl: it is indeed a slow slog, but it's somewhat satisfying -- not everything I wrote is garbage. I'm hoping to cut 10-15% of the thing out at least, though. I can see now that when word count matters, I get all oblique in my writing. That and heady over-use of the word "seemed" are my biggest issues so far.

@Mike: I don't know what Monda's talking about. All Serious Knitters have a mighty Stash somewhere in the house that tends to grow without bounds and eventually occupy secret places, like the insides of suitcases and the turkey roasting pan. Not that I or my spouse have ever done such things.