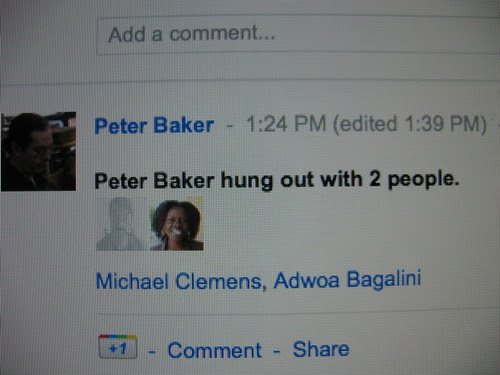 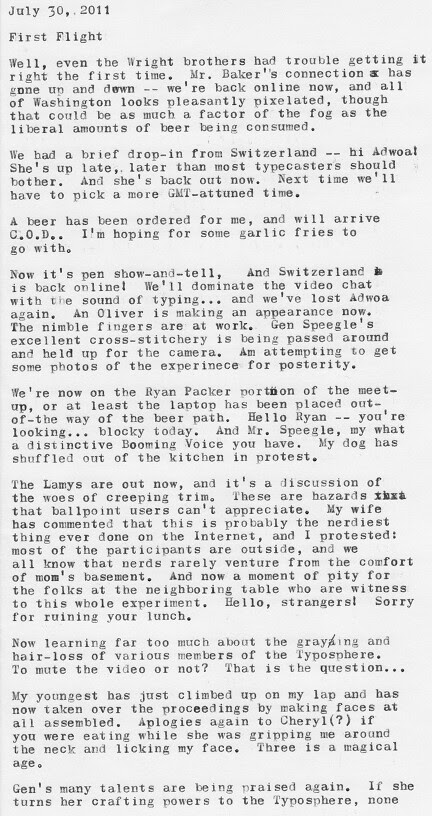 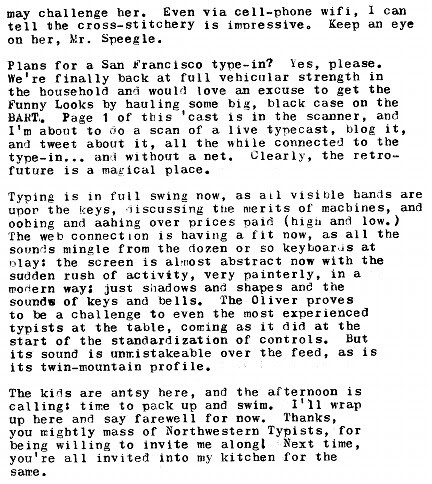 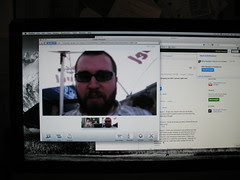 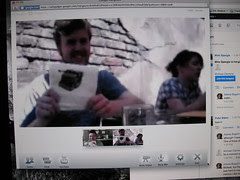 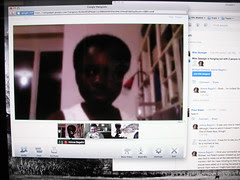 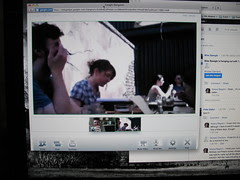 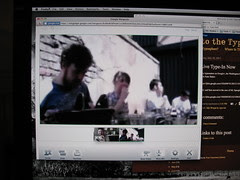 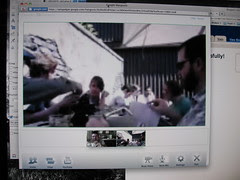 I suppose it's noteworthy that at no point did I think to use the screen-shot software, but that I had to use the camera, to document this in true type-in fashion. Yeah, that's my excuse.

Hurrah for the first virtual type-in! A good time was had by all, except possibly the other diners. But that's what they should expect, living in Seattle, right?

Oh, and I really must apologize, Mr. Clemens, if things got a bit ribald. With all the excitement it was easy to forget that there were wee ones over the virtual link. Plus, I think i was born without that part of the brain that helps limit volume.

I think there were a few "Typecasters Gone Wild" moments, but at least we stopped short of flaming Hermes 3000 tattoos...

I'm thinking a completely virtual type-in might work a little better, since it would make it easier to see and hear one another. All I could see was an itty-bitty face at the far end of the table, and I wasn't sure it could see or hear me... But glad you were able to join in some fashion!

Don't worry about the sensitive ears of my little darlings: they often hear worse when it's time for us to leave the house and an adult can't find their $*#&$!!!ing keys.

Mike, you were surely situated near the laptop, and the conversations generally blended together, but your commentary was loud and clear, although you remained mostly unseen (but pics are coming.) The boisterousness was welcome: it looked and sounded like a lot of fun.

Elizabeth, I believe I spotted you down near the end of the table there for a while, too. And a fully-virtual type-in would be worth doing, too. I know that the technology was a bit limiting here. But it was a great first type-in for me (yes, really) and the time flew by, so I couldn't quite understand the are-you-done-playing-with-your-friends looks I was getting off-camera. I give Google+ hangouts a "plus" (har har har.)

For the record, I completely cracked up when I saw you pull the camera out for (literally) taking screen shots.

Oh, wow, there I am! It still looks like I live in a cave... in my defense, I didn't have any natural light to work with :) I am very glad I tuned in for a while and got to see the cross-stitched towel live, hear some clacking, and watch your daughter wave hello.

I thought it was hilarious when you started taking actual pictures of the screen, and I almost did the same myself (the screenshot command on a Mac is not intuitive and I always forget how to do it). But then I kept dropping out of the chat, so I decided to stick to just the typecast.

I look forward to a completely virtual type-in too, LFP. It will be an interesting experiment to plan sometime in the near future, although it might be a challenge to coordinate the time zones. Hopefully, more European typecasters will join in next time so you all aren't getting up early just for lil' ol' me :)

Lols to the Booming Voice and nerdiest thing ever done on the internet. Also the literal screen shots and Typecasters Gone Wild moments, that was all Speegle, of course.

Surely you jest when you wonder whether I would be offended by the weird antics of children under 5.

That was pretty cool. We all noticed when you were the only one typing. Going pretty fast too, you were.
Glad the kids got over their shyness enough to appear on cam. The all-virtual sounds fun too - public hubs or from our writing lairs?

Elizabeth - My tattoo offer still stands (I'll pay for everyone's tattoos if we ALL get typewriters.)

I'm with Cheryal about the Typecasts Gone Wild moments - it was all
Speegle's fault. (I was in NO WAY responsible for any of the craziness. Nope. Not at all. Completely innocent...)

Clemens - I saw you a bunch but I don't know how your view was. I tried holding up a handwritten note but I don't think it worked. What I was trying to say that I still owe a letter.

I use screenshots a LOT so it comes second nature: cmd+shift+4, then spacebar+click

You did great for having the presence of mind to record it all, well done, now I feel like I missed the event of the century!

See that Clemens? Now you HAVE to show up to a type-in up here, if only for the free tattoo.

And I see that, apparently, the only one to capture video of this event (as far as I've been able to locate) was a complete non-typospherian who happened to walk by.
Shame. Shame on the lot of y'all.