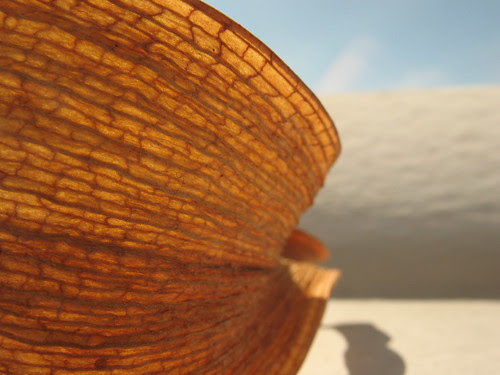 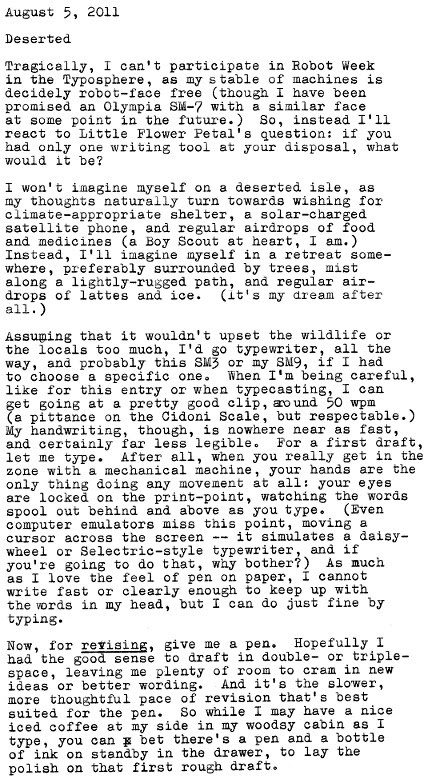 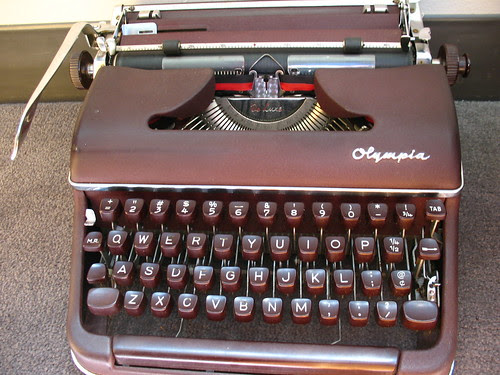 Email ThisBlogThis!Share to TwitterShare to FacebookShare to Pinterest
File under: anablog, morticia, olympia, pen and paper, sm3, the timeless utility of paper, typecast, what if

That photo is a stunner. And I sympathize greatly with your choice of writing weaponry.

My lonnnnng two cents: while an Alphasmart or typewriter may be better able to keep up with my thoughts, my thoughts tend to be wildly spinning things. It seems like, with the pen, I can think of a sentence in various forms as I'm writing it and sort out the best one. And if I change my mind halfway through, I cross out and continue, without having to manually hit a backspace or reach for a pencil to put a line through that bit. It's all more fluid, and I think my pen writing shows it. Writing I've done on the typewriter tends to be choppier, more staccato.

And then, I like the way the pen connects you to the words: the very shape of them is all completely in your hands. You feel the letters as they are transferred to the page, rather than merely seeing them appear. And my brain seems to like that, for whatever reason.

Once I'm really in the groove of a story, it doesn't matter as much which method I use, and that's where the typewriter often shines. But for the initial jump, or for those times when the words just one come...the pen is a magic tool for me.

The words find shape under my hand, too: the shape of the town drunk, staggering all over the page. It's embarassing.

I actually don't have the staccato-writing issue, but quite the opposite: because my hands can keep up with my brain, some of my typed sentences start one way, get restarted in the middle, and then finish a third entirely different way. (This is why word count is rarely an issue for me at NaNo time: every sentence is three times too long from the outset.) A pen may make me a better writer, but on the typewriter, I'm a better drafter.

I totally get this- "...some of my typed sentences start one way, get restarted in the middle, and then finish a third entirely different way."

Risky (especially for a perfectionist!) but exciting.

When I was asked the desert island/one item question at work a few months back, and I answered a reflective space blanket, for keeping wamr, signalling ships with reflections, etc. Everyone looked at me like I was crazy.

Other'n that, though, I understand what you mean by sentences starting one way and then ending up another. I also have that problem when I don't review my notes from previous days. For instance, I referred to a character as being "gaunt" on one page and then "flabby" on the next.

Ah, Gomez is in fine form in this picture. I'd take along my SM-3 as well, though I don't have a name for it.