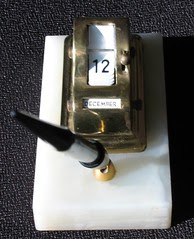 In lieu of any other identifying marks, I've decided to name this no-name pen Murray. Like too many things in my life this year, Murray came by way of shopgoodwill.com. I'd been looking at desk calendars for some time, as a little extra retro-junk to litter up my workspace. I'd lost out on a ticky-tacky World's Fair model, but the fates provided, and Murray in all his brassed glory is now enjoying his retirement in California.

Why "Murray?" A little quick research on the nib (marked "Velvet Point 6") shows this pen to be what's charitably classed "third-tier" by those in the know, a kinder way of saying "a step above junk." Still, I'd been also meaning to get a desk set at some point, and this fit the bill. Murray's nib was broken ages ago -- it's only got one tine -- but after careful application of force and swearing, I was able to remove the old nib and feed, and shove in replacements from a cheap gold-nibbed calligraphy set I had picked up last year, thus converting this into a Frankenpen. "Murray" seems like a pretty average name for an otherwise average pen, even if he has had some work done.

I figure this pen sat on the desk of some middle-aged, Midwestern*, middle-of-the-road manager, maybe a thank-you gift for years of uneventful service. The finish on the date knob is brassed away from patient years of counting off the days. It's not a flashy set and yet... I like it. We have a lot in common, Murray and I: generic heritage, utilitarian without being flashy, just trying to be ready and useful without leaking everywhere.

* Don't take offense, Midwesterners. The pen came from Illinois. This wasn't meant as a pejorative.

Email ThisBlogThis!Share to TwitterShare to FacebookShare to Pinterest
File under: fountain pen, murray, stop me before i thrift again

Way to go on repairing Murray! I've been pretty craven about doing much of anything in the way of fountain pen repairs...fortunately my two favorites (a $5 Parker 21 and a $30 Parker 51, both in horribly chewed up shape cosmetically speaking) are pretty well bomb proof, as are the cheap Platinum Preppys I keep around. But it'd be nice to know how to re-sac and replace nibs and other such things....

What sort of filler system is Murrey, or is he going to be used dip style?

Murray's a plain old lever-and-sac filler. Someone has changed the sac relatively recently, since it's still quite supple and flexible. I was expecting an intact nib and a disintegrated sac, but got the opposite. All the luckier, since I had suitable parts on-hand to do a replacement.

Gorsh, out here in flyover country, we ain't got much use for fancy pen writin'.

Hey, scoff if you must, but I firmly believe nothing compares to a decent (not necessarily pricey) fountain pen for marathon writing sessions. Personally, my hand cramps up after a page or so of writing with a ballpoint and I have to take a break. Much more than that, and I have wrist/arm pain. Conversely, I can (and do) write for hours at a stretch with the 51 with nothing more to show than a bit of a callus where it rubs against my finger.

And if you aren't an ink maven, they're actually very economical as well. For under twenty bucks, you can pick up a decent pen and a bottle of ink, and be good to go for at least a full year of heavy writing. I don't know about you, but I can go through a gel pen within days. Figure that out over time and suddenly the one or two dollar pen doesn't seem like much of a bargain. Of course, I've rarely met a blue or brown or green ink I didn't covet...so that doesn't really play out. But it could!

And hey, many of the best pens were built in what I guess would qualify as fly-over country. I'm a die-hard Parker fan, personally...and they started in Wisconsin. Sheaffer is another big 'merican manufacturer, and they were in Iowa. Many of the other smaller companies have equally red-blooded blue-collar roots.

I like my pens. They aren't fancy, admittedly, and I have about the same feeling about pen collecting as I do about those who collect really old or rare typewriters: I can kind of see the appeal, but it isn't for me. I don't want anything around that I can't *use*.

I'm with use, Elizabeth. I prefer "user" pens to "collectible" pens, and -- like typewriters and cameras -- won't pay too much for them.`

I'm also a Parker girl, but addicted to the gel ballpoint refills and I'm on the lookout for a snazzy ballpoint desk set like your Murray.

I guess I'll have to try a damn fountain pen now. Oh, the peer pressure.