Fussing, and Making Do, and Moving the Hand 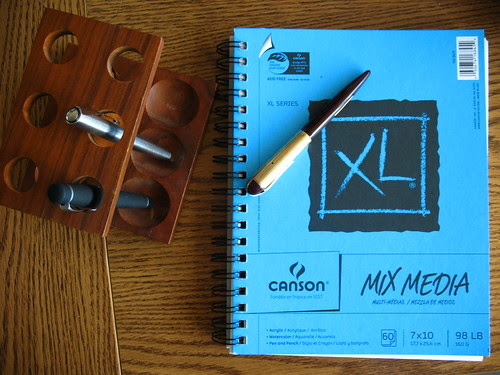 I'm re-reading Natalie Goldberg's Writing Down the Bones right now, having just wrapped up Chris Baty's No Plot, No Problem. If you've suffered through my endless posts of late, you know that having no plot is not a problem for me: I'm soaking in plot, so to speak. What I'm lacking right now, though, is excitement about the story I have in mind. It's probably pre-NaNo anxiety, so I'm trying to read Inspirational Writing-Type Books that won't necessarily make me love it, but will at least get me to relax about it and just let the words come. But of course I'm happiest when I'm fussing around and fretting and planning and plotting. And as hippy-trippy as Bones can be -- and it is -- Goldberg's mantra of keep your hand moving is a good one, and I'm trying to absorb it (again.)

I'm also fussing about the letters that are sitting on my desk, waiting to be replied to. In fact, I've got two letters from one person, which is throwing me completely off. Our home is in disarray right now thanks to a long-overdue remodeling project, and I'm still enjoying the last week and a half of lunchtime walks before they are sacrificed to NaNo, so my typing time has been reduced to nil. What I need to do, I've decided, is reply to these letters by hand to get past the angsty writing-block stew that I've brewed for myself. And that leads to fussing about stationery. Or finding some that says "middle-aged ordinary guy" not "Hello Kitty obsessed tweener" or worse yet, "Miss Havisham." Short version: there isn't much. Longer version: at least not reasonable for someone that expects to write more than a dozen letters in a year. So, I'm making do.

After some surreptitious testing in the store (ahem) I've picked up a drawing tablet by Canson, pictured above. And I think it will do. As Goldberg reminds us, it is the writing that is important, and I'm simply fussing too much right now to let myself do it. So if you're on the receiving end of one of my letters, you can expect a bit more rambliness than usual -- if you can even tell -- as I practice defussing with a moving hand.

Email ThisBlogThis!Share to TwitterShare to FacebookShare to Pinterest
File under: shaddup and write, surprises in the mail, the timeless utility of paper

I was going to highly recommend HP's Premium Choice LaserJet paper as stationery, provided you can swing the initial outlay and/or can find it very on-sale. But on further consideration, while it is wondrous paper, it may not be the best for letters. It'd be like mailing a brick. Airmail-worthy it is not. But it's awfully, awfully nice to write on with fountain pen. And if you're curious in spite of the weight...shoot me a message back channel and I'd be happy to send you a sample. I have lots!

Does this make me a paper pusher?

If you ever want to treat yourself to a fancy Italian blank book, I recommend epica.com.

@LFP: You are a pusher, but that's not a bad thing in my book. That HP paper comes highly recommended by the Rollabind/Circa crowd because of the sturdiness (required for disc-binding.) Considering you'd pay that price for 20 sheets of "the good stuff" and it's actually quite reasonable. Have you used it with pens? I suppose the thickness would keep the ink bleed to a minimum.

@Rcihard: blank books are not the problem, nor are lined and girdded ones, as I take every opportunity to snatch up hopeful-looking ones. I'm currently enjoying the Rhodia Webnotebook -- the "webbie" -- which I reviewed this summer. For on-the-go writing, it's outstanding. But for letter-writing... not so much.

I'm realizing now that the drawing tablet paper is probably still too thick to put a lot of sheets into a single envelope -- 98 pound paper! It was inexpensive, though, and I can always pull out sheets and type on them if needed.

I've used it almost solely with fountain pens. My handwritten NaNo two years back started with a Circa notebook made with this paper.

And it's not just that the thick paper prevents bleed-through, it's that whatever they do to finish the surface of the paper...it's magic. Wonderfully smooth, no feathering, no bleeding, nothing. And unlike many of the other papers that don't feather or bleed, ink seems to dry quickly. (In contrast, I gave up on using the also highly recommended Black n' Red because in the one notebook I bought, I ended by resorting to ballpoint because fountain pen ink could go HOURS without drying. Really. The fountain pen pages are one big schmear.) I really like the HP paper, in case that's not blatantly obvious.

Rambliness is not only a cool word but the presence of it makes for fun letters.

One ramble is in the mail. Apologies to the receiver. More to follow.

Will certainly be checking out the HP paper!

When I was a NaNo ML (Municipal Liason, for those not in the know) a few years back, I would put into each noveling packet a business-card size version of Goldberg's Rules. I still have a bunch if anyone wants one or some.

I take great amusement in the fact that Goldberg stresses not falling victim to the creativity-strangling "monkey mind", and right there on the NaNo participant logo is a flippin' monkey.